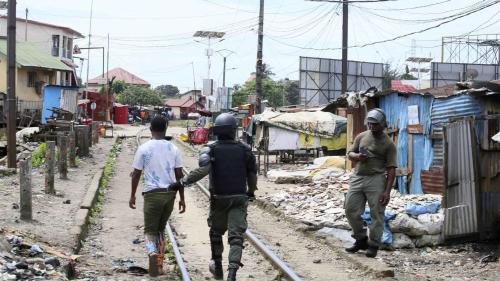 As opposition and civil society in Guinea raised concerns over a proposed constitutional revision that could permit President Alpha Conde to run for a third term run in 2020, the government cracked down on freedoms of assembly and speech.

The government banned all but a handful of street demonstrators, and security forces arrested dozens of protesters and broke up demonstrations using tear gas and, at times, live ammunition. At least 17 people were allegedly killed by security forces during protests in October and November, and protesters killed at least one gendarme. Six civil society activists leading opposition to a new constitution were also arrested and imprisoned in October. Several journalists were arrested on defamation charges and briefly detained for coverage critical of the government.

The government made little progress in investigating dozens of alleged unlawful killings that have occurred during protests in the last decade, with the February 2019 conviction of a police captain the first time a security forces’ member has been held accountable for the death of a demonstrator since Condé came to power in 2010. In November, the justice minister said the long-delayed trial of those responsible for the 2009 stadium massacre would be held not later than June 2020.

The government largely continued to enforce a July 2018 ban on street protests, citing threats to public security. Opponents to a new constitution were particularly targeted by protest bans, including three protesters arrested in Coyah in March, a dozen members of the Bloc Liberal party on April 5, seven protesters in Kindia—initially sentenced to three months but released on appeal—and 40 people arrested on June 13 in N’Zérékoré after an effort by security forces to break up an opposition protest led to intercommunal clashes. Those arrested in N’Zérékoré were detained until a June 20 trial, when 22 were convicted of public order offences

The crackdown on protests intensified in October as the government banned and then violently dispersed three days of anti-constitution protests on October 14-16. Nine civil society leaders were arrested on October 12 and six convicted on October 22 for organizing the protests and sentenced to between 6 and 12 months’ imprisonment. Dozens of demonstrators were also arrested, detained for several days, and then released or fined.

The government finally authorized several anti-constitution protests beginning October 24, although disagreement over the route of a November 14 protest led to clashes between protesters and security forces. Five anti-constitution activists also detained in Kindia on November 14. Pro-government supporters organized a rival protest on October 31.

Demonstrators arrested during protests in May, June, October, and November accused the police and gendarmerie of stealing money, telephones, and other possessions.

In July, the National Assembly adopted a law on the use of force by the gendarmerie that could shield law enforcement from prosecution in cases of unlawful killing. The law requires that force only be exercised where necessary and proportionate but does not explicitly limit the use of firearms to imminent threats of death or serious injury.

Also in July, the National Assembly adopted an anti-terrorism law with several provisions that could threaten human rights, including prolonged detention in police custody and vague offenses for “apologizing for terrorism.”

Justice for the 2009 Stadium Massacre

Ten years after security forces massacred over 150 peaceful opposition supporters, and raped dozens of women, at a stadium on September 28, 2009, those responsible have not been tried. Guinean judges have indicted 14 people over the massacre, including Moussa Dadis Camara, then-leader of the military junta that ruled Guinea in September 2009, and individuals who remain in positions of power such as Moussa Tiegboro Camara, who is in charge of fighting drug trafficking and organized crime. In August 2019, a steering committee, established in August 2018 to organize the trial, confirmed Conakry’s Court of Appeal as the site for the trial. Justice Minister Mohammed Lamine Fofana stated in November that the trial would take place no later than June 2020.

Accountability for Past Crimes

With the exception of a handful of cases, impunity largely continued for past human rights abuses. There have been no trials for at least a dozen alleged killings of demonstrators by the security forces during protests in 2018, as well as for demonstrat0rs killed in protests in 2019. There have similarly be no trials for the killing of protesters prior to and following the 2015 presidential elections and the 2013 parliamentary elections; for the 2012 killing of six men in the southeastern mining village of Zoghota; or the 2007 killing by security forces of some 130 unarmed demonstrators.

On February 4, 2019, a court convicted police captain Kaly Diallo for shooting dead a protester in August 2016. However, the case was marred by charges by rights groups of inadequate evidence. Despite dozens of alleged unlawful killings during demonstrations by the security forces since 2010, the case was the first conviction of a security force member for killing a protester.

In February 2019, a court sentenced a captain in an elite police unit to six years’ imprisonment for the 2016 torture of a detainee that had been filmed on a cellphone and widely shared.

The trial of the former governor of Conakry, Sékou Resco Camara, and the former head of the army, Nouhou Thiam, for the 2010 torture of several opposition detainees, which began in April 2018, was repeatedly delayed.

Threats to media freedoms, which have increased in the last several years, continued in 2019 with several journalists arrested and then released for coverage critical of the government.

Journalist Lansana Camara was arrested March 26 on defamation charges for accusing a government minister of corruption. He was released on bail on April 2. Mohammed Bangoura, head of an online news site, was arrested July 1 on defamation charges after his site published an op-ed by an opposition politician. Two executives from The Lynx media group were arrested April 19 and later released on bail for broadcasting an interview with a ruling party dissident.

An opposition politician, Faya Millimouno, was detained August 2 on defamation charges for accusing a government minister of participation in a 2000 rebellion. He was released on bail August 9.

The judiciary continued to face various shortcomings, including lack of adequate court rooms and other physical infrastructure, as well as insufficient personnel and resources to investigate and prosecute human rights violations and other crimes.

Guinean prisons and detention centers operate far below international standards, with severe overcrowding due to over-reliance on pretrial detention, weak case management, and the failure of the courts to sit regularly. The country’s largest detention facility in Conakry remained overcrowded with poor sanitary conditions. In July 2019, a facility built for 300 housed 1492 detainees.

Between February and May 2019, the Guinean government forcibly evicted more than 20,000 people from neighborhoods in Conakry to provide land for government ministries, foreign embassies, businesses, and other public works. The government did not provide adequate notice to most of those evicted, or any alternative housing for demolished homes.

Guinea’s natural resources, notably bauxite and gold, were a major driver of economic growth. The bauxite sector continued to expand rapidly in the Boké and Boffa regions, leading to thousands of farmers losing their land to mining, often for inadequate compensation, and damaging vital water sources in the area.

The government began the displacement of approximately 16,000 people to make way for the Souapiti hydroelectric dam. Although the dam will potentially increase access to electricity in Guinea, villages displaced so far have received inadequate compensation for their land, and inadequate assistance obtaining alternative livelihoods.

Following the October repression of protests against a new constitution, the United Nations, the Economic Community of West African States (ECOWAS), the European Union and the United States, along with several European states, issued statements reiterating the importance of freedom of assembly and expression.

The Office of the United Nations High Commissioner for Human Rights on October 25 condemned the use of excessive use of force by security forces and the arrest of protest organizers. The ambassador of Russia, which has significant financial investments in the bauxite sector, spoke openly in favor of a Condé third term in January, spurring criticism from Guinean civil society.

The office of the UN special representative on sexual violence in conflict and the Team of Experts on the Rule of Law/Sexual Violence in Conflict continued to support accountability for rapes and crimes committed during the 2009 stadium massacre. The International Criminal Court (ICC) also continued to play a positive role in promoting the September 28, 2009 investigation through its engagement with Guinean authorities.