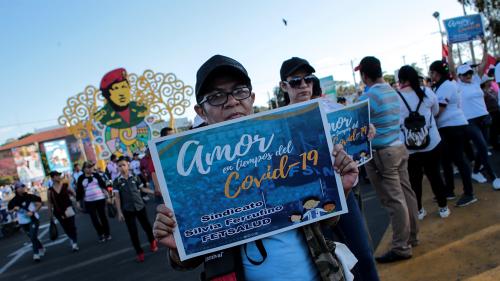 Since taking office in 2007, the government of President Daniel Ortega has dismantled nearly all institutional checks on presidential power. The Electoral Council, stacked with his supporters, has barred opposition political parties and removed opposition lawmakers. The Supreme Court of Justice has upheld Electoral Council decisions undermining political rights and allowing Ortega to circumvent a constitutional prohibition on re-election and run for a second term.

In October, Congress passed two bills, proposed by President Ortega, that could seriously undermine freedom of association and free speech.

The government’s response to Covid-19 included denying its impact and failing to implement measures recommended by global health experts. Initially, the government encouraged large-scale public events. It has not closed schools or ordered lockdowns or social distancing. In April, Ortega said he was against public campaigns that urged people to stay at home.

A brutal crackdown by the National Police and armed pro-government groups left over 300 dead and 2,000 injured in 2018, and resulted in hundreds of arbitrary arrests and prosecutions. The Ortega government has continued to bring criminal cases against protesters and critics. Impunity for human rights abuses by the police continues.

Persistent problems include severe restrictions on freedom of expression and association, political discrimination against state workers who support the opposition, and stringent abortion laws that leave no options for rape victims.

Denial, inaction, and opacity have characterized the government’s response to the Covid-19 pandemic. The government took no emergency measures in response to the pandemic and has kept schools open. Initially, Vice President Rosario Murillo encouraged people to attend massive events, including a government-organized march through Managua in April.

While the government reported over 5,000 cases and more than 140 deaths, as of September, the nongovernmental organization Covid-19 Citizen Observatory (Observatorio Ciudadano Covid-19) registered twice as many suspected cases and 2,700—nearly 20 times as many—suspected deaths. Authorities have covered up suspected Covid-19 deaths, according to media, describing them as “atypical pneumonia” and sending health officials and police to conduct “express burials” of victims.

The government has refused to provide information on the number of Covid-19 tests performed.

Up to August 2020, the government fired at least 31 doctors from public hospitals in apparent retaliation for participation in protests or expression of disagreement with management of the Covid-19 response. During the 2018 crackdown, at least 405 doctors, nurses, and other health workers were fired from public hospitals, seemingly for providing care to protesters or criticizing the government.

In April 2018, massive anti-government protests broke out countrywide. Police, in coordination with armed pro-government groups, brutally repressed protesters, which left a death toll of 328 people and almost 2,000 people injured, and led to hundreds of detentions. As the crackdown intensified, some individuals responded violently. Authorities reported that 21 police officers allegedly died in the context of demonstrations between April and September.

Hundreds of protesters were arbitrarily arrested and detained, many for months. Many were subjected to torture and ill-treatment including electric shocks, severe beatings, fingernail removal, asphyxiation, and rape. Serious violations of due process and other rights marred prosecutions.

In March 2020, Melvin Alberto Urbina Saavedra died after police beat him in detention, his family reported to the Nicaraguan Human Rights Center (CENIDH), an NGO. In April, police arrested at least five and injured two demonstrators commemorating the 2018 protests in Esquipulas, Moyogalpa. In August, police summoned Francisco Aguirre Sacasa, a government critic and former foreign minister, to a police station. When Sacasa arrived, police arrested him without informing him of the charges against him and without allowing him access to a lawyer. He was also presented to the press surrounded by highly armed police officers. Sacasa was released a few hours later but remains subject to criminal prosecution for allegedly purchasing stolen goods for his antiques collection.

In 2019, the Ortega administration released 492 people detained in the context of the 2018 protests, mostly under restrictions such as house arrest. A broad amnesty followed, lifting the restrictions, Office of the United Nations High Commissioner for Human Rights (OHCHR) reported. As of September 2020, OHCHR estimated that 94 perceived critics remained incarcerated.

Owing in part to the amnesty, no investigations or criminal proceedings were underway, at time of writing, to identify and convict those responsible for human rights violations related to the 2018 crackdown. In 2019, President Ortega promoted top officials implicated in abuses.

In October 2020, Congress passed a “foreign agents” bill, proposed by Ortega, that could be used to further suppress dissent. The law requires many people and groups that receive direct or indirect funding from abroad to register as “foreign agents” and bars them from intervening in “matters of internal politics.” The law could impact journalists, nongovernmental organizations (NGOs), and political opponents. The law additionally prevents anyone registered as a “foreign agent” in the past year from running for public office.  Also in October, Congress adopted  a cybercrime bill that criminalizes a wide range of online communications, including by punishing with sentences of up to 5 years in prison the “publication” or “dissemination” of “false” or “distorted” information on the internet “likely to spread anxiety, anguish or fear.”

In addition, Ortega said he would propose a constitutional amendment to allow life sentences for “hate crimes,” in September. These bills could further undermine the political opposition’s efforts to compete fairly in November 2021 presidential elections.

In September 2019, Army Commander-in-Chief Julio César Avilés Castillo accused NGOs of being “coup-plotters.” As of June 2020, Congress had stripped 10 NGOs of legal registration, forcing them to close.

In March 2020, police stood by while people shouting pro-Ortega slogans attacked and robbed at least three journalists from independent news outlets covering a funeral in Managua. Also in March, Emiliano Chamorro, director of digital outlet El Portavoz Ciudadano, reported experiencing police surveillance and harassment. In July, Gerall Chávez, the co-founder of digital outlet Nicaragua Actual—who went into exile in 2018 after threats and harassment by government supporters—received threats on Facebook, including an animation that depicted him being killed.

In August, three employees of the El Rama mayor’s office filed a criminal slander complaint against Kalúa Salazar, a journalist at radio station La Costeñísima, after she reported on corruption. At time of writing, Salazar awaited trial. In October, a pro-government group attacked and gravely injured journalist Verónica Chávez, from the news outlet “100% Noticias,” in Masaya as she was leaving a meeting with the opposition.

Between April 2018 and April 2020, over 90 journalists have fled Nicaragua, IACHR estimates.

As of April 2020, more than 103,000 citizens had fled Nicaragua since April 2018, IACHR reports. In March, the United Nations High Commissioner for Refugees reported neighboring Costa Rica hosting some 77,000 Nicaraguan refugees and asylum seekers.

Nicaragua has, since 2006, prohibited abortion under all circumstances, even if a pregnancy is life-threatening or the result of rape or incest. Women and girls who have abortions face prison terms as long as two years. Medical professionals who perform abortions face one to six years. The ban forces women and girls confronting unwanted pregnancies to seek illegal and unsafe abortions, risking their health and lives.

In September 2019, OHCHR released a comprehensive report on Nicaragua’s human rights record from August 2018 to July 2019, urging the government to guarantee civil society freedoms; reinstate shuttered NGOs and media outlets; investigate and prosecute rights abuses in the context of protests; and end arbitrary arrests, among other measures.

As of September 2020, most recommendations had not been implemented, OHCHR reported, contributing to new violations and continued impunity. The OHCHR noted persistent restrictions on civic space, particularly the government’s targeting of journalists and human rights defenders, and that the 2019 Amnesty Law had furthered impunity for serious human rights abuses.

In 2018, the government expelled the IACHR Special Monitoring Mechanism for Nicaragua (MESENI), the IACHR-appointed Interdisciplinary Group of Independent Experts (GIEI), and the OHCHR. The IACHR has continued to monitor the situation in Nicaragua, including by reporting on bans on social protest; the government’s attack on freedom of expression; the lack of reliable information regarding the impacts of the Covid-19 pandemic; and the stigmatization and persecution of journalists and human rights defenders; among other topics. No other international monitoring bodies have been allowed since the 2018 expulsions.

In June 2019, the Organization of American States General Assembly passed a resolution that opens the door to evaluation of Nicaragua’s compliance with the 2001 Inter-American Democratic Charter, which enables the OAS secretary general, or any member country, to convene a Permanent Council meeting to address situations where there has been an “unconstitutional alteration of the constitutional regime that seriously impairs the democratic order in a member state.” The resolution urged the government to take steps toward resumption of negotiations with the opposition and restoration of access for international rights-monitoring mechanisms. It called for a commission to undertake diplomatic efforts. In September 2020, the government barred the commission from entering Nicaragua.

As of September 2020, the US Treasury Department had imposed targeted sanctions against 17 Nicaraguan officials responsible for abuses or corruption. Fourteen were sanctioned pursuant to Executive Order 13851 and three pursuant the Global Magnitsky Act of 2016, which allows for sanctions against human rights violators. Of the 14, 5 were also sanctioned pursuant to the Nicaraguan Human Rights and Corruption Act of December 2018.

In May 2020, the European Union and United Kingdom imposed sanctions against six Ortega administration officials, including travel bans and asset freezes against top officials responsible for abuse. In June, Switzerland also imposed financial and travel sanctions on six government officials. In October, the European Parliament adopted a resolution condemning Nicaragua’s deteriorating human rights record and urging a tougher EU approach in the absence of any progress. EU member states renewed the sanctions against the regime until October 2021.

In October 2020, the Organization of American States General Assembly passed a resolution setting May 2021 as the deadline for the Ortega government to implement electoral reforms necessary to guarantee free, fair, and transparent elections in November 2021.