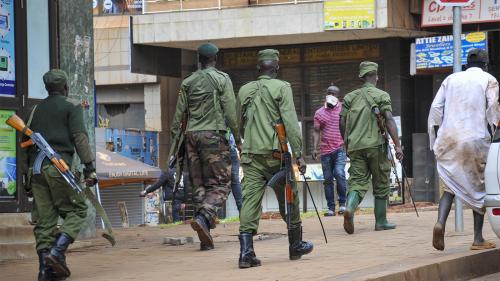 Authorities in Uganda stepped up restrictions on freedoms of expression and assembly ahead of general elections in February 2021. Authorities broke up opposition rallies, arrested government critics and opposition members, and placed restrictions on media. Security forces used Covid-19 restrictions as a pretext to beat, extort, and arbitrarily detain people.

Freedom of Expression and Assembly

The government introduced new requirements that restrict freedom of expression online. On September 7, the Uganda Communications Commission issued a public notice requiring “providers of online data and communication,” including bloggers and online TV providers, to seek authorization from the body by October 5, 2020, and pay a fee of 100,000 Uganda shillings (US$26.82).

On July 24, Ugandan police arrested four comedians, part of a group called Bizonto, for a satirical video they posted online calling on people to pray for top Ugandan government officials. The video highlighted that the leaders are all from the western region of the country, implying that power is concentrated in a group of men from one region. The group was released after four days in detention.

On July 27, plainclothes police arrested television host Bassajja Mivule. Police said videos of him circulating on social media “promote hatred.” Mivule told media that when he was questioned, the police played video clips of him speaking  about Minister of Information and Communications Technology Judith Nabakooba, which they said was offensive toward her, and another in which Mivule rallied Baganda people “to rise up,” for which police accused  him of promoting sectarianism.

On March 26, the Constitutional Court nullified section 8 of the Public Order Management Act (POMA), which has been used by police to block, restrict, and disperse peaceful assemblies and demonstrations by opposition groups, often with excessive force.  The move came after the court ruled on a 2013 petition by civil society organizations challenging the law as being unconstitutional.

On January 6, police blocked public meetings by presidential candidate Robert Kyagulanyi, also known as Bobi Wine, in Gayaza, just outside the capital Kampala, saying Kyagulanyi had not met all the requirements of POMA. As Kyagulanyi and his group were gathering to meet, police arrested them and fired teargas to disperse people from the area.

On March 29, community residents and police raided a Children of the Sun Foundation (COSF), a shelter for homeless lesbian, gay, bisexual, and transgender youth in Wakiso, outside Kampala. Police beat and arrested 23 adults, including shelter residents, and charged them with “a negligent act likely to spread infection of disease” and “disobedience of lawful orders.” Twenty residents of the shelter were detained by police for over six weeks without access to lawyers for allegedly disobeying Covid-19 restrictions.

In May, the Office of the Director of Public Prosecutions withdrew the charges, and on May 18, the Nsangi Magistrate’s Court ordered the release of the 20 detainees. On June 15, a court ruled that the prison system’s refusal to allow the 20 people access to counsel violated their rights to a fair hearing and to liberty.

Uganda’s penal code punishes “carnal knowledge” among people of the same sex with up to life in prison.

Arrest and Harassment of Opposition Members and Supporters

Authorities have on several occasions blocked meetings of opposition members as they sought to consult their constituents.

On January 7, police blocked parliamentarian Robert Kyagulanyi’s pressure group People Power from accessing a venue where they were to hold a consultative meeting with the public, and the next day blocked another event planned by the group in Lira in northern Uganda. This time police detained Kyagulanyi, but released him shortly after. Police also arrested journalists covering the events in Gayaza, outside Kampala, and Lira, and reportedly ordered at least one reporter to delete his footage of the events.

In 2020, the case of Dominic Ongwen, alleged former Lord’s Resistance Army (LRA) commander charged with 70 counts of war crimes and crimes against humanity, concluded at the International Criminal Court (ICC). Closing statements took place from March 10 to 12. A verdict was pending at time of writing. Two ICC warrants remain outstanding for the arrest of LRA leaders Joseph Kony and Vincent Otti, who is presumed dead.

The International Crimes Division (ICD) of Uganda’s High Court continued the trial of alleged former LRA commander Thomas Kwoyelo—in custody since his capture in the Democratic Republic of Congo in 2009—on charges of war crimes and crimes against humanity. The trial has had numerous delays, and proceedings also were suspended due to Covid-19.

In March, President Yoweri Museveni announced a series of measures to prevent the spread of Covid-19, including a ban on private and public transport, as well as the suspension of non-essential services, and the closure of bars, restaurants and non-food markets, schools and places of worship, the airport, and the country’s borders.

On March 30, he directed the police to arrest politicians who distributed food. The government said that food donations had to go through a government-organized task force. On April 4, the government began to provide food assistance targeting 1.5 million people in Kampala and Wakiso, and eventually other parts of the country.

Security forces in Uganda beat, extorted, shot, and arrested people for allegedly failing to comply with the government’s Covid-19 restrictions.

On March 23, media reported that soldiers beat locals in Mityana district, outside Kampala, claiming they were not respecting the order to close bars. On March 24, Agnes Linda Auma, resident district commissioner in charge of security in Amuru district, Northern Uganda, threatened during a radio interview to beat people who congregated in public spaces.

On March 26, media reported that police shot and injured two construction workers, Alex Oryem and Kassim Ssebudde, who were riding a motorcycle taxi in Mukono, outside Kampala, in violation of the ban on motorcycle transport with multiple passengers. The same day, members of the Local Defense Unit (LDU), an armed paramilitary group affiliated with the army, used wires and sticks to beat several people, including vendors selling fruit and vegetables and motorcycle riders, in downtown Kampala in an apparent attempt to punish non-compliance with the measures to close non-food markets. On March 30, Army Chief of Defense Forces David Muhoozi publicly apologized to Hadijah Aloyo, Christine Awori, and Safia Achaya, three victims of the LDU attacks, and announced that the military would hold the individual members responsible, without specifying how. He also announced that there would be a new commander for the units in Kampala.

On March 28, six police officers shot at a group of people in Bududa, in the eastern region of Uganda, injuring one, ostensibly to enforce the ban on public gatherings. Media reported that the police subsequently arrested David Agaba, the policeman in command.

On March 30, stick wielding LDU members attacked Alfred Ssembajjwe, a journalist and motorcycle taxi driver in Makindye, in Kampala, purportedly claiming to implement the government’s Covid-19 curfew and ban on public transport. The LDU members demanded a bribe from him then let him go. The Committee to Protect Journalists reported that security forces, purportedly enforcing these measures, have harassed or assaulted at least six journalists between March 19 and April 22.

In July, the military withdrew LDU forces from their operations, reportedly to undergo training on human rights, in response to criticisms of the group’s enforcement of Covid-19 restrictions.

On  April 19, police arrested and later beat parliamentarian Francis Zaake for distributing food to the public as part of Covid-19 relief assistance in Mityana. Police held him for several days at the Special Investigations Unit (SIU) in Kireka, Kampala, but released him on bond on April 27. Zaake accused police and military officers of torturing him while he was in detention. Previously in 2018, soldiers had beaten Zaake and 32 others; on that occasion, Zaake was brought unconscious by “men in military uniform” to a hospital in Kampala.

On June 9, a military tribunal dropped charges against UPDF soldiers accused of brutalizing students protesting fee increases during a raid on Makerere university in Kampala in October 2019. During the raid, police and soldiers fired teargas into student residences, raided dormitories, and beat and arrested students, detaining dozens for days without charge. The Military Police spokesperson said none of the students who were allegedly brutalized showed up to testify.

On February 5, 2020, Parliament’s human rights committee released findings from an August 2019 investigation into allegations that the country’s security agencies were detaining people in several unacknowledged and ungazetted places of detention across the country often referred to as “safe houses,” and subjecting detainees to torture. The committee found that authorities continue to operate safehouses and to subject detainees to torture and abuse, with near total impunity.