(Almaty) – Kazakhstan’s new trade union law, adopted after unresolved labor strikes in 2011, has made it more difficult to organize independent unions in the country, Human Rights Watch said in a report released today. Changes to the labor and criminal codes have contributed to an environment hostile to worker activism.

The 69-page report, “‘We Are Not The Enemy’: Violations of Workers’ Rights in Kazakhstan,” details the significant legal and practical obstacles workers in Kazakhstan must overcome to organize and defend their interests in the workplace. Human Rights Watch interviewed more than 50 trade union leaders, labor activists, and workers in key industries across Kazakhstan, and documented harassment, surveillance, and, in some cases, spurious legal prosecution or dismissals in apparent retaliation for labor activism. The Kazakh government should take immediate steps to lift restrictions on workers’ rights and the ability to organize. 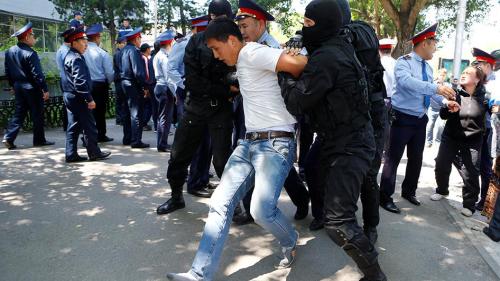 “Robust trade unions are a trademark of a democratic society based on respect for human rights, and essential to the defense of workers’ rights and interests in the workplace,” said Mihra Rittmann, Europe and Central Asia researcher at Human Rights Watch. “Kazakhstan’s 2014 trade union law is a deliberate attempt to curtail independent trade union activism and restrict workers’ rights to organize.”

Kazakhstan is cultivating an image of a regional power and has sought opportunities to bring itself into the international spotlight. In June 2016, Kazakhstan won a non-permanent seat on the UN Security Council, beginning on January 1, 2017. It is also a major regional hub for foreign investment in the oil industry and other sectors.

Ensuring international standards on labor rights, in particular the rights of workers to freedom of association and to organize, should be an integral part of Kazakhstan’s approach, Human Rights Watch said.

Following unresolved labor strikes in western Kazakhstan, which ended in clashes that killed at least a dozen people in the oil town of Zhanaozen in December 2011, the government announced it would improve labor relations and “modernize trade union institutions.”

Rather than improve labor relations, a new trade union law has imposed burdensome registration requirements on trade unions in Kazakhstan and a mandatory affiliation requirement with higher-tier unions that are at stark odds with internationally protected workers’ rights to freely organize. The government also adopted a new labor code in 2015, which restricts workers’ rights to collective bargaining, as well as their fundamental right to strike.

Erlan Baltabai, an oil worker trade union leader in Shymkent, southern Kazakhstan, told Human Rights Watch that in his workplace pressure started on trade union members in January 2012, soon after he was elected chairman: “Foremen began to scare workers, pressuring them saying ‘don’t join that trade union, or you’ll have problems. We can fire you, or find something against you,’” he said.

“We Are Not the Enemy”

Violations of Workers’ Rights in Kazakhstan

A number of labor activists and workers said they had been monitored by the security services for normal union activities.

Larisa Kharkova, president of the Confederation of Independent Trade Unions of the Republic of Kazakhstan (KNPRK), said she has faced surveillance by the authorities, including during a trip to western Kazakhstan in March 2016. “I was surrounded in Aktau – day and night [by security services],” she said. “I went to meet the [union] guys – we were sitting there, talking, and we could see how [the security agents] drove up and photographed us.”

“Dosym D.” a worker activist in central Kazakhstan whose real name is not being used to protect him from retaliation, said that the police summoned him and tried to intimidate him by showing him an open file about him. “What surprised me is that the police are from the [department] combating extremism,” he said. “Show me where in my actions I display extremist behavior!”

Kazakhstan is a state party to the International Covenant on Economic, Social and Cultural Rights, which protects the right to strike as well as to form and join trade unions and national and international confederations.

Kazakhstan is also a member of the International Labour Organization (ILO) and has ratified all of its eight fundamental conventions, including Convention 87 of 1948 on freedom of association and Convention 98 of 1949 on the right to organize. Convention 87 states that workers have the right to establish and, subject only to the rules of the organization concerned, to join organizations of their own choosing without previous authorization.

In 2015 and 2016, Kazakhstan was strongly criticized for its restrictions in the Trade Union Law by the International Labour Conference, the highest-level decision-making body of the ILO. In June 2015, the ILO’s Committee on the Application of Standards called on Kazakhstan to “amend the provisions of the Trade Union Law of 2014 consistent with the Convention.” Kazakhstan has not amended the law.

The government of Kazakhstan should take immediate steps to amend the trade union law, as well as labor and criminal codes, to bring them in compliance with ILO conventions and international human rights standards. Companies operating in Kazakhstan and authorities should ensure that employees do not face retaliation or harassment for trade union activism.

Kazakhstan’s key economic partners, especially the European Union, EU members, and the United States, should press the government to carry out labor reforms as part of their dialogues with the Kazakh government.

“Workers in Kazakhstan are entitled to organize and defend their interests without fear of harassment and reprisal,” Rittmann said. “If Kazakhstan wants to be global player it should take heed of the conclusions of the ILO, uphold its international obligations to respect human rights, and amend rights-violating laws and practice without delay.”