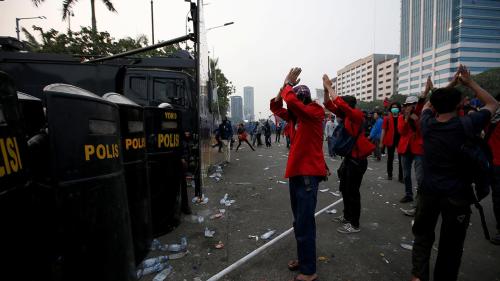 During his first term, Jokowi took only small and tentative steps to advance human rights. Religious and gender minorities continue to face harassment. Authorities arrest and prosecute people under the blasphemy law, and all cases that went to trials resulted in prison terms. Jokowi also did not press for investigation of gross human rights abuses in Indonesia’s past.

In August, a racist attack against West Papuan students in Surabaya triggered an uprising in Papua and West Papua provinces. It prompted the Jokowi administration to send more than 6,000 troops to the two provinces. At least 53 people, both Papuans and migrants from other parts of Indonesia, were killed in the ensuing clashes. Indonesian authorities also shut down the internet there.

On September 17, the outgoing parliament passed a bill weakening Indonesia's Corruption Eradication Commission. It also planned to pass a new criminal code, which had provisions that would violate the rights of women, religious minorities, and lesbian, gay, bisexual, and transgender (LGBT) people, as well as freedom of speech and association. The Papua uprising and these rushed legislative amendments triggered the biggest nationwide protests in 20 years against Jokowi’s ruling coalition, prompting Jokowi to have parliament delay voting on the draft criminal code and three other bills until 2020. 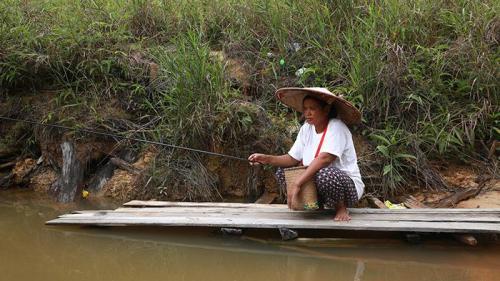 In 2019, Indonesian authorities put three women on trial for alleged violations of the country’s blasphemy law. In March, a Serang court sentenced Aisyah Tusalamah, who has a psychosocial disability, to five months’ imprisonment for posting an allegedly blasphemous video. Police detained Suzethe Margareta, who has paranoid schizophrenia, for bringing her dog to a mosque in Bogor in June. In November, a court in South Sulawesi sentenced Eka Trisusanti Toding, an English teacher, to five months jail over her allegedly blasphemous comments on Facebook about Islam. In April, the Supreme Court rejected a Buddhist woman’s appeal of a blasphemy verdict in Medan, North Sumatra. Meliana had complained about the decibel level of the call to prayer at a mosque in 2016 and was sentenced to one-and-a-half years in prison.

Ahmad Moshaddeq, 75, the founder of Millah Abraham—a new religion with a back-to-the-land movement—died inside a Jakarta prison in February while serving a five-year prison term for "blasphemy against Islam." More than 7,000 members of his community were forcibly evicted from their farm houses on Kalimantan island in 2016.

The draft criminal code seeks to expand Indonesia’s blasphemy law from one to six articles to include offenses such as “persuading someone to be a non-believer.”

In May, six people died and more than 200 were injured in Jakarta after supporters of Prabowo Subianto, who lost the presidential election, clashed with security forces and set fire to a police dormitory and vehicles. Prabowo initially refused to accept the April election result, filing a petition at the Constitutional Court, but he lost the lawsuit in May.

In September, Surabaya police issued an arrest warrant for Veronica Koman, an Indonesian human rights lawyer, alleging she was “spreading fake news and provoking unrest.” Koman has shared videos on her Twitter account of the recent unrest in Papua.

In September 27, police arrested documentary filmmaker Dandhy Laksono after he posted a tweet about violence in Jayapura and Wamena, Papua. He was charged with violating the online hate speech law.

In September, parliament revised the 1974 marriage law, raising the minimum age of marriage for girls and boys with parental consent from 16 to 19, but retaining a clause that allows courts to authorize marriages of girls below 19, with no minimum age restriction. Around 14 percent of girls in Indonesia are married before age 18, and 1 percent marry before age 15.

The Jokowi government failed to stop abusive, unscientific “virginity tests” of women who apply to join the military, or to institute measures to curb female genital mutilation, which continues to be used in rites of passage in some areas. Parliament also failed to pass a draft bill on sexual violence.

After video circulated of Indonesian militias racially abusing Papuan students in Surabaya on August 17 amid rumors that students there had damaged an Indonesian flag flying outside their dorm, Papuans demonstrated in at least 30 cities across Indonesia, including Jakarta. Rioting Papuans burned down the local parliament building in Manokwari, and prisons in Sorong, West Papua province, and Jayapura, Papua province.

In Deiyai on August 28, video footage posted on social media shows police shooting live ammunition into a crowd of Papuan protesters inside the Deiyai Regency office. Eight Papuans and one Indonesian soldier were killed, and 39 Papuans were injured. Police arrested 16 men, charging them with rioting.

On September 1, a mob joined by police and soldiers armed with machetes surrounded a Papuan student dorm in Jayapura, after which a Papuan student was stabbed to death and more than 20 were injured.

In total, Indonesian authorities have detained 22 people in Jakarta, Manokwari, Jayapura, and Sorong in connection with raising the pro-Papuan independence Morning Star flag or speaking about “West Papua independence” in public.

On September 23-24, at least 43 people were killed in Wamena and more than 1,500 people were evacuated by air to Jayapura. After alleged racial taunts by a teacher, students marched to the local regent office and later burned it down. Protesters also torched the business area, killing at least 24 settlers from other parts of Indonesia who dominate the economy there.

Indonesian authorities continued their assault on the basic rights of LGBT people. HIV rates among men who have sex with men (MSM) have increased five-fold since 2007 from 5 to 25 percent, and arbitrary and unlawful police raids on private LGBT gatherings in recent years, often assisted by militant Islamists, have effectively derailed public health outreach efforts to vulnerable populations.

Among the most controversial provisions of the draft criminal code is a provision that would punish extramarital sex by up to one year in jail. While the provision does not specifically mention same-sex conduct, same-sex relationships are not legally recognized in Indonesia and if passed it would effectively criminalize all same-sex conduct.

In March, a gay former policeman filed a lawsuit against the Central Java Police after he was dismissed in December 2018 for allegedly failing to protect the image of police as a force upholding “religious norms, codes of decency, and local values.” Two courts rejected his legal challenge.

In November, Medan court in North Sumatra rejected a lawsuit from college students Widiya Hastuti and Yael Sinaga, the editor and publisher of Suara USU, a student newspaper, against North Sumatra University after the administration closed down the publication and dismissed the 17-person newsroom staff following the publication of a lesbian love story in March. Administrators claimed that the story was “promoting homosexuality.”

Despite a 1977 government ban on the practice, people with psychosocial disabilities continue to be shackled by family members, traditional healers, and staff in state institutions, in some cases for years. Due to prevalent stigma and inadequate support services, including mental health care, more than 57,000 Indonesians with psychosocial disabilities (mental health conditions) have been chained or locked in a confined space at least once in their lives.

In 2018-2019, the Indonesian government took important steps to uphold the rights of people with psychosocial disabilities. Several agencies—including the National Human Rights Commission, National Commission for Violence Against Women, National Commission for Child Protection, the Ombudsman, and the Witness and Victims Protection Agency—signed an agreement to monitor places where people with psychosocial disabilities have been shackled or detained. These include traditional faith healing centers, social care institutions, and mental health facilities.

In July, forest fires began to ravage Sumatra and Kalimantan islands, many of the fires deliberately lit to clear land for vast oil palm or paper pulp plantations. In late August, the fires burned many areas in 13 provinces; the provinces of Riau, Central Kalimantan, and West Kalimantan suffered the worst levels of air pollution. The Air Quality Index in some of those 13 provinces reached the maximum 500 level, affecting millions of people with respiratory problems (levels above 300 are so hazardous that everyone can experience effects). The police has charged five corporations and 218 individuals involved in the fires.

A patchwork of weak laws, poor government oversight, and failure of oil palm plantation and paper pulp companies to fulfill their human rights responsibilities have also affected Indigenous peoples’ rights to their forests, livelihood, food, water, and culture, including in two cases documented in detail by Human Rights Watch in 2019.

In 2004, West Kalimantan, Iban villagers were pushed off their land by an oil palm company, PT Ledo Lestari, when bulldozers and other equipment rolled in to raze their land. A decade later, PT Ledo Lestari signed agreements with some families to relocate their homes a few kilometers into the plantation but did not provide any compensation for the loss of their indigenous forest and livelihoods derived from it. Their community is now located within the company’s oil palm plantation, leaving them no land to grow food and sustain their livelihood. The forest has been largely destroyed, including plants they use for food and materials used to make mats and baskets they sell to supplement household revenue.

In Jambi, Sumatra, the company PT Sari Aditya Loka 1 did not adequately consult with an indigenous group, the Orang Rimba, who were forced off their land, and did not mitigate the harm after earlier legal reforms had introduced clear obligations to do so. The company has to date not organized any meaningful consultations nor reached agreement to provide remedies to the Orang Rimba displaced from their forests. Many Orang Rimba are now homeless, living in plastic tents without livelihood support, and in abject poverty.

In January, Indonesia began its two-year term on the United Nations Security Council, choosing peacekeeping as the theme of its May presidency but mostly abstaining on sensitive issues, including the ongoing humanitarian and human rights crisis in Venezuela.

At the UN Human Rights Council in Geneva, and in the UN General Assembly’s Third Committee in New York, Indonesia was among the Muslim-majority countries that did not sign a statement supporting China’s policies in Xinjiang that ignored widespread repression of the region’s Muslims. The Xinjiang issue has been a key test of whether members of the Organization of Islamic Conference (OIC), including Indonesia, will press an increasingly powerful China to end its systemic abuses against Muslims. The 57-country OIC has largely remained silent.

At time of writing, the Indonesian government had not set dates for a visit to Papua and West Papua by the UN high commissioner for human rights, despite President Jokowi’s 2018 invitation to the commissioner. In August, the Pacific Islands Forum, a regional group, “strongly encouraged” Indonesia to finalize terms of the visit. In September, the high commissioner, Michelle Bachelet, noted she was “disturbed by escalating violence in the past two weeks in the Indonesian provinces of Papua and West Papua, and especially the deaths of some protestors and security forces personnel.”

In August, Australia and Indonesia signed a free trade agreement. Prime Minister Scott Morrison witnessed the signing along with President Jokowi in Jakarta. Both countries are among the world's top 20 economies but not among each other's top 10 trading partners.

On June 23, leaders of the Association of Southeast Asian Nations (ASEAN), including Jokowi, met in Bangkok, but did not call on Myanmar to provide a path to citizenship for Rohingya Muslims, including some 730,000 who fled Rakhine State to escape an ethnic cleansing campaign organized by Myanmar’s military in 2017 and who now live in Bangladesh or are seeking refuge in other ASEAN countries.

The European Union-Indonesia human rights dialogue took place in November in Brussels; the European Union raised concerns on some provisions in the draft criminal code, including the death penalty.