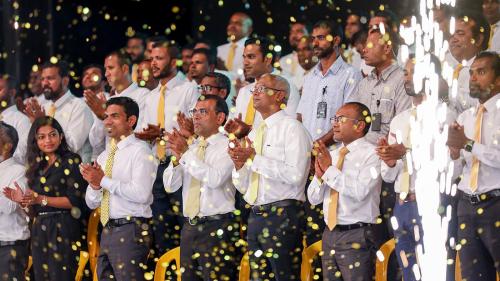 Although the Maldives took some steps in 2019 to address longstanding human rights concerns, in November the government shut down the most prominent human rights organization in the country in response to complaints from religious leaders that it had insulted Islam. Extremist groups continued to pose a threat to human rights defenders and activists whom they accused of being “too secular,” and to exert influence over the police courts, and other government institutions.

The Maldivian Democracy Network (MDN), a leading human rights organization, and its staff faced threats for a 2015 report on radicalization, published during the previous Yameen government, which Islamist groups claimed included language insulting Islam. Although MDN issued an apology for causing unintended offense and removed the report from its website, Islamist groups issued threats on social media against MDN staff and other rights groups and activists. The government detained two men for making death threats against the MDN founder, Shahindha Ismail. On November 5, the government yielded to pressure from Islamist groups and political opposition figures, including former president Yameen, and ordered the dissolution of MDN.

Accountability for Past Abuses

In November 2018, the Solih government established the Commission on Deaths and Disappearances to investigate past attacks on activists and journalists. Cases included the 2014 abduction of Ahmed Rilwan, who had criticized Islamist gangs and exposed government corruption, and Yameen Rasheed, a blogger and activist who was stabbed to death in April 2017. In January, the commission chair, former Attorney General Husnu Al Suood, stated that extremist Islamist gangs had influence over police and criminal courts, and colluded to protect perpetrators and “fix” the outcome of trials.

On September 1, the commission issued a draft report accusing a local extremist group with ties to Al-Qaeda of Rilwan’s murder. On November 17, the commission reported that local extremists had also murdered a former MP, Dr. Afrasheem Ali, in 2012. In both cases, the commission implicated police and politicians in shielding the perpetrators from prosecution. The trial of six suspects accused of killing Yameen Rasheed was delayed repeatedly.

In a separate case, the commission recommended charges against prison officials over the death of a prisoner who had not received needed medical care in November 2016.

In April, a government-established prison audit commission issued a report detailing corruption, systemic abuse and mistreatment throughout detention facilities in the Maldives. The commissioner of prisons, Abdulla Munaz, declared a Malé prison annex used for older and sick inmates “unfit for humans” after an inspection, and closed it. The home minister established a committee to oversee prison reform, reduce overcrowding, and implement the audit commission’s recommendations.

In June, prison guards beat and pepper-sprayed inmates at Maafushi Prison after a prisoner attacked an off-duty guard. Prisoners alleged that wounded inmates were left without medical care for extended periods. Home Minister Imran Abdulla acknowledged that guards had used what he termed “excessive force” and vowed to end torture in prisons.

A video showing police officers beating an unarmed man went viral on social media in July, prompting the police commissioner to suspend the officers involved and promise an investigation, saying the “culture of police brutality needs to go.” The Human Rights Commission of the Maldives (HRCM) also launched an investigation.

On January 23, unidentified assailants vandalized Mandhu College after its chairman, Ibrahim Ismail, criticized clerics who had voiced support for a magistrate who had sentenced a woman to stoning. Islamist groups also accused Ismail of blasphemy and threatened him on social media.

On September 11, police arrested a man who had received death threats online and charged him with insulting Islam. The Maldives penal code criminalizes “criticism of Islam in a public medium.” Police investigated the threats but made no arrests.

After the September 2018 elections, parliament repealed the Anti-Defamation and Freedom of Expression Act, which the previous government had used to levy heavy fines against media that published content critical of the president.

In a historic vote on September 3, the parliament confirmed former judges Dr. Azmiralda Zahir and Aisha Shujune Mohamed as the first female justices of the Maldives Supreme Court. Some clerics had opposed the appointments. Women are severely underrepresented in the Maldives’ judiciary, parliament, and local governing bodies. The Judicial Service Commission launched an investigation into sexual harassment in courts after a string of recent complaints against members of the judiciary.

On January 7, 2019, a magistrate in Naifuri, an island in northern Maldives, sentenced a 25-year-old woman to death by stoning on charges of adultery. The Maldives Supreme Court overturned the verdict the following day, prompting extremists to denounce the ruling and threaten human rights activists who had criticized the stoning verdict.

Gender-based violence is endemic in the Maldives. Maldivian women routinely face harassment in public, most of which goes unreported. On March 8, International Women’s Day, activists organized an “Occupy Reygandu” (“Occupy the Night”) gathering in Malé and two southern cities to highlight the need for safe public spaces. Another protest, “Occupy SaiHotaa,” focused on women’s harassment-free access to restaurants.

The Maldivian penal code criminalizes adult, consensual same-sex sexual conduct; punishment can include imprisonment of up to eight years and 100 lashes, although this is not often applied. Extremist groups in the Maldives have used social media to harass and threaten those who promote the rights of LGBT people.

During a visit in June, the United Nations special rapporteur for cultural rights, Karima Bennoune, urged the government to “grab the chance offered by a moment of reform” to combat extremism and ensure the rights of all to take part in cultural life without discrimination. UN Special Rapporteur on Torture Nils Melzer conducted his first official visit to the Maldives in November.

The Maldives’ major donors and allies welcomed President Solih’s pledges to implement democratic reforms and restore fundamental rights. The European Union, which had threatened sanctions against members of the Yameen administration in 2018, congratulated the Maldives on its return to “the path of democracy.” The European Union also provided assistance to the Maldives to strengthen judicial reform and address climate change.

Indian Prime Minister Narendra Modi made a state visit to the Maldives in June, during which he and President Solih signed a range of trade and development agreements, including a memorandum on information-sharing between the Indian navy and the Maldives.

Although Solih had criticized the scale of debt for projects China had financed in the Maldives under the previous administration, his government signed new loan agreements, stating that China remains “an important bilateral development partner.”