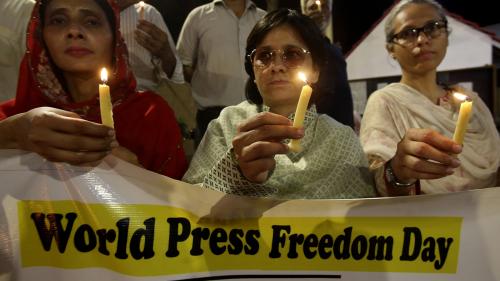 Although Prime Minister Imran Khan pledged to make social justice a priority after taking office in July 2018, his administration has increased restrictions on media, the political opposition, and nongovernmental organizations (NGOs).

Scores of civilians were killed in attacks by the Pakistani Taliban, Al Qaeda, and other armed groups. Members of extremist groups, government officials, and politicians threatened the media and carried out violent attacks on journalists.

The government cracked down on members and supporters of political parties. Several opposition leaders, including former heads of state and cabinet ministers, were arrested over corruption allegations. Members of the Pashtun Tahhaffuz Movement (PTM) held protests demanding accountability for extrajudicial killings and enforced disappearances.

In May, Aasia Bibi, a Christian woman who had spent eight years on death row for blasphemy, was released and allowed to rejoin her family in Canada. The Pakistan Supreme Court had acquitted Aasia in October 2018, but she had remained in custody due to nationwide protests by religious groups.

Freedom of Expression and Attacks on Civil Society

Pakistan’s media operated in a climate of fear that impeded coverage of abuses by both government security forces and extremist armed groups. On June 16, Muhammad Bilal Khan, a freelance journalist who ran a popular YouTube channel covering politics, was stabbed to death in Islamabad. In response to such threats and attacks, journalists increasingly practice self-censorship.

On July 9, the Pakistan Electronic Media Regulatory Authority (PEMRA) blocked three television news channels—Capital TV, 24 News HD, and Abbtakk News Network—after they broadcast speeches of opposition leaders. The Pakistan Broadcasters Association, a private industry association, claimed that the channels were taken off air without giving them a reason or a hearing.  On July 1, PEMRA terminated a live interview with former President Asif Ali Zardari on GEO TV shortly after it began.

On February 9, the Federal Investigating Agency arrested Rizwan-ur-Rehman Razi, a journalist and television host in Lahore, for social media posts that allegedly “defamed state institutions” in violation of Pakistan’s cybercrimes law. Razi was subsequently released. In May, the authorities arrested a journalist, Gohar Wazir, for reporting on protests by minority Pashtuns.

Human Rights Watch received several credible reports of intimidation, harassment, and surveillance of various NGOs by government authorities. The government used the “Regulation of INGOs in Pakistan” policy to impede the registration and functioning of international humanitarian and human rights groups.

In May, authorities registered a criminal case for inciting violence and defaming state institutions against Gulalai Ismail, a women’s rights activist and Pashtun leader, following protests against the rape and murder of a 10-year-old girl in Islamabad. After months in hiding, Ismail fled to the US, where she sought asylum.

Freedom of Religion and Belief

The Pakistani government did not amend or repeal blasphemy law provisions that provide a pretext for violence against religious minorities, as well as arbitrary arrests and prosecution. Hundreds have been arrested over blasphemy allegations, most of them members of religious minorities. The death penalty is mandatory for blasphemy, and 40 people remained on death row at time of writing.

In April, a tailor in Taxila, Punjab, was arrested after local traders and religious leaders accused him of blasphemy. In May, riots erupted in Mirpurkhas, Sindh, after a Hindu veterinary doctor was accused of  blasphemy for allegedly providing medicines wrapped in paper printed with Islamic verses.

The provisions of Pakistan’s penal code, which perpetuate discrimination against the Ahmadis, a religious minority, remain unchanged. In August, the district administration in Lahore sealed an Ahmadiyya prayer center after the local clerics objected to Ahmadis being allowed to pray openly.

While numerous cases of violence against women and girls highlighted the difficulty survivors face getting justice, authorities succeeded in enforcing some key reforms.

In August, in an important enforcement of laws to prosecute so-called “honor killings,” the parents of Qandeel Baloch, a Pakistani social media celebrity who was murdered by her brothers in July 2016, were denied their request to “pardon” the perpetrators. After Qandeel’s murder, the parliament passed a law closing the pardon loophole  used by families to protect perpetrators. However, very few cases of honor killings  were prosecuted.

In July, the Supreme Court of Pakistan held that in cases of acid attacks, a mercy petition filed by the victim forgiving the perpetrator cannot be allowed because it constitutes “extreme cruelty.”

In August, the national assembly’s standing committee on law and justice rejected a bill proposing to fix the minimum age of marriage of girls at 18. Early marriage remains a serious problem, with 21 percent of girls in Pakistan marrying before the age of 18, according to UNICEF. A number of  women and girls were trafficked to China and sold as “brides.”

Over 5 million primary-school-age children are out of school, most of them girls, for reasons including lack of schools in their areas, child marriage, and gender discrimination.

The Tehrik-Taliban Pakistan (TTP), Al Qaeda, and their affiliates carried out suicide bombings and other indiscriminate attacks against security personnel that caused hundreds of civilian deaths and injuries during the year. They also carried out unlawful attacks targeting civilians.

On April 12, 20 people were killed, and 48 injured in an improvised explosive device attack in a market in Quetta, Balochistan, targeting the Hazara community. On July 21, nine people including six policemen were killed in two attacks in Dera Ismail Khan district, Khyber-Pakhtunkhwa. The TTP claimed responsibility for all the attacks.

On April 18, unidentified assailants forced 14 passengers to disembark from a passenger bus on the Makran Coastal Highway and then executed them. On May 12, after militants attacked a hotel in Gwadar, Balochistan, killing 5 people, the Balochistan Liberation Army (BLA) claimed responsibility.

Pakistani law enforcement agencies were responsible for human rights violations, including detention without charge and extrajudicial killings. Pakistan failed to enact a law criminalizing torture despite Pakistan’s obligation to do so under the Convention against Torture.

On January 19, the police in Sahiwal district, Punjab killed four members of a single family including a teenage girl in an operation police claimed was targeting a militant leader. However, witness accounts suggest that the police fired indiscriminately at the family’s car. The police officials involved were arrested and face murder charges.

On September 1, Saluhddin Ayubi in Rahim Yar Khan district, Punjab was arrested for robbing a cash machine and soon died in custody. His family claimed Ayubi, who had a mental health condition, had been tortured to death by the police. A forensic report subsequently corroborated the torture claims.

In August, the Punjab anti-corruption department accused police officers in Lahore of keeping suspects in a secret detention cell and torturing them. Punjab police ordered an inquiry.

In May, three people were killed and several others injured in violence between Pashtun activists and the army in North Waziristan. Each accused the other of initiating the clash at a military checkpoint at Khar Kamar.

Pakistan has more than 4,600 prisoners on death row, one of the world’s largest populations facing execution. At least 511 individuals have been executed since Pakistan lifted the moratorium on death penalty in December 2014. Those on death row are often from the most marginalized sections of society.

In June 2019, Pakistan's Supreme Court halted the execution of Ghulam Abbas, a prisoner with a psychosocial disability who had spent more than 13 years on death row.

Parliament passed a comprehensive transgender rights bill in 2018. However, Pakistan’s penal code criminalizes same-sex sexual conduct, placing men who have sex with men and transgender women at risk of police abuse, and other violence and discrimination.

The TTP and other Islamist militant groups carried out violent attacks on healthcare workers involved in providing grassroots services and polio immunization.

A spate of attacks in April resulted in the government temporarily suspending the polio immunization campaign throughout the country. On April 23 and April 24, police officers protecting polio workers were gunned down in Khyber Pakhtukhwa. On April 30, two unidentified assailants killed a female polio worker in Chaman, Balochistan. The vaccination campaign resumed after the government launched an awareness campaign and asked social media platforms to remove anti-vaccine content.

Prime Minister Khan visited the United States, the country’s largest development and military donor, in July, during which he pledged to facilitate the Afghan peace process.

Pakistan and China deepened extensive economic and political ties in 2019, and work continued on the China-Pakistan Economic Corridor, a project consisting of construction of roads, railways, and energy pipelines. In July, Pakistan along with more than a dozen Muslim majority countries signed a letter supporting China’s policies in Xinjiang that ignored widespread repression of the region’s Muslims.

In May, Pakistan and the International Monetary Fund (IMF) agreed on a US$6 billion bailout package for Pakistan.

In June, the European Union and Pakistan announced their 2019 Strategic Engagement plan, which includes cooperation on human rights. In January, the European Union’s High Representative Federica Mogherini welcomed the release of Aasia Bibi, calling on Pakistani authorities to ensure her safety and that of her family.

In September, following the Indian government’s decision to revoke the constitutional autonomy of  Jammu and Kashmir state, and arrest Kashmiri leaders and cut off phones and the internet, Pakistan downgraded its diplomatic relations, expelled the Indian high commissioner, and sought international intervention with a Security Council discussion. The Security Council held a closed-door discussion on the issue at the request of Pakistan and the backing of China. It also attempted to get support for a resolution on Kashmir at the UN Human Rights Council. When this did not materialize, Pakistan, backed by China and many states of the Organization of Islamic Cooperation, instead delivered a joint statement.