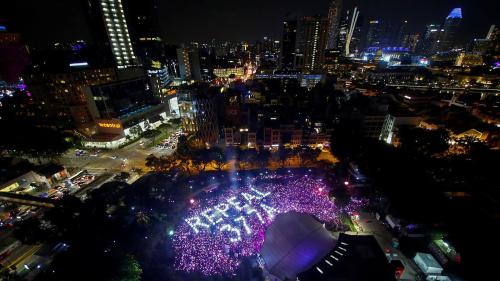 Singapore’s restrictions on speech tightened in 2019 with the passage of the overly broad Protection Against Online Falsehoods and Manipulation Act. Authorities continued to use existing laws to penalize peaceful expression and protest, with activists, lawyers, and online media facing prosecution, civil defamation suits, and threats of contempt of court charges.

Freedoms of Expression and Peaceful Assembly

Freedom of speech in Singapore is restricted through the use of broadly worded criminal laws and the use of civil lawsuits and regulatory restrictions. In April 2019, activist Jolovan Wham and opposition politician John Tan were sentenced to pay fines of S$5,000 (approximately US$3,620) each for “scandalizing the judiciary” on social media. Wham was convicted for posting on Facebook that “Malaysia’s judges are more independent than Singapore’s for cases with political implications.” Tan’s conviction was for commenting on his Facebook page that Wham’s prosecution “only confirms that what [Wham] said is true.”

Terry Xu, editor of The Online Citizen, one of the few alternative news sites in Singapore, is facing both criminal and civil defamation charges for material published on the platform. In December 2018, he was charged with criminal defamation for publishing a letter criticizing a Facebook post by a lawmaker and alleging corruption in the upper echelons of the Singapore government. Although The Online Citizen took down the letter two weeks later after an order from the government Info-communications Media Development Authority (IMDA), both Xu and the author of the letter were charged with criminal defamation. If convicted, they face up to two years in prison.

In September 2019, Prime Minister Lee Hsien Loong sued Xu for civil defamation after The Online Citizen published claims made against Lee by his siblings about the disposition of the home of Lee Kwan Yew. While at time of writing Lee had not sued those who made the statements cited in the article, he was seeking to recover damages and costs from Xu.

In May, the Singapore Parliament passed the Protection of Online Falsehoods and Manipulation Act, a sweeping piece of legislation that permits a single government minister to declare that information posted online is “false,” and order the “correction” or removal of such content where, in their view, doing so is in the public interest. The law applies to digital content that is accessible in Singapore regardless of where the content was posted and to platforms such as WhatsApp and Signal. It includes criminal penalties for failure to comply with such orders.

The government maintains strict restrictions on the right to peaceful assembly through the Public Order Act, requiring a police permit for any “cause-related” assembly if it is held in a public place, or in a private venue if members of the general public are invited.

The definition of what is treated as an assembly is extremely broad and those who fail to obtain the required permits face criminal charges. Jolovan Wham was convicted in January 2019 of violating the Public Order Act by permitting Joshua Wong, a citizen of Hong Kong, to participate in an indoor conference via Skype without first obtaining a police permit. He was sentenced to 16 days in jail or a fine of S$3,200 (approximately US$2,357). In January 2019, three United Nations experts issued a statement raising concern about the conviction and calling for amendment of the Public Order Act. In October 2019, the High Court dismissed Wham’s appeal of his conviction.

Wham was also facing charges for organizing a peaceful protest on a train and a candlelight vigil for a condemned prisoner, and was being investigated for violating the Public Order Act by taking a photograph of himself outside a courthouse while holding a sign calling for the criminal defamation charges against Terry Xu to be dropped.

Singapore retains the death penalty, which is mandated for many drug offenses and certain other crimes. However, under provisions introduced in 2012, judges have some discretion to bypass the mandatory penalty and sentence low-level offenders to life in prison and caning. There is little transparency on the timing of executions, which often take place with short notice. While the number of those executed in 2019 is uncertain, a Malaysian man was executed in March despite pending petitions for clemency and 10 individuals were notified in July that their petitions for clemency had been rejected.

Those speaking out against the death penalty in Singapore have faced repercussions. In July, the Singapore Attorney-General's Chambers sent a letter to the court accusing a Malaysian lawyer seeking clemency for a Malaysian man on death row of making “scandalous allegations against Singapore and its legal system.” In August, the Attorney General’s Chambers filed a complaint with the Law Society accusing lawyer M. Ravi of conduct unbecoming of a lawyer and asking the Law Society to take action against him for statements made in connection with his defense of an inmate on death row.

Corporal punishment is common in Singapore. For medically fit males ages 16 to 50, caning is mandatory as an additional punishment for a range of crimes, including drug trafficking, violent crimes (such as armed robbery), and even immigration offenses such as overstaying a visa by more than 90 days.

The rights of lesbian, gay, bisexual, and transgender (LGBT) people in Singapore are severely restricted. Sexual relations between two male persons remains a criminal offense under criminal code section 377A and there are no legal protections against discrimination based on sexual orientation or gender identity. Three court challenges to the constitutionality of section 377A were pending before the Singapore courts at time of writing.

The Media Development Authority effectively prohibits all positive depictions of LGBT lives on television or radio. In July 2019, Singapore Polytechnic withdrew an invitation to a local DJ, Joshua Simon, to give a TED talk after he refused to delete references to his sexuality from the presentation.

Foreign migrant workers are subject to labor rights abuses and exploitation through debts owed to recruitment agents, non-payment of wages, restrictions on movement, confiscation of passports, and sometimes physical and sexual abuse. Foreign women employed as domestic workers are particularly vulnerable to abuse.

Work permits of migrant workers in Singapore are tied to a particular employer, leaving them vulnerable to exploitation. Foreign domestic workers, who are covered by the Employment of Foreign Manpower Act rather than the Employment Act, are effectively excluded from many key labor protections, such as limits on daily work hours and mandatory days off. Labor laws also discriminate against foreign workers by barring them from organizing and registering a union or serving as union leaders without explicit government permission.

In June, Singapore was one of only six countries to abstain from a new International Labour Organization convention protecting against violence and discrimination in the workplace.

Singapore is a regional hub for international business and maintains good political and economic relations with both China and the United States, which considers it a key security ally.

While the European Parliament passed a resolution in February raising concerns about the country’s treatment of its LGBT population and ongoing restrictions on freedom of expression and assembly, few countries publicly criticized Singapore’s poor human rights record, focusing their priorities instead on trade and business.