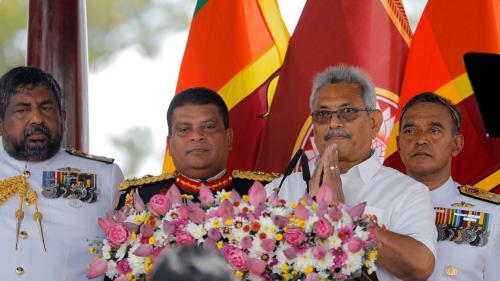 On April 21, Easter Sunday, Islamist suicide bombers attacked churches and hotels in Colombo and two other cities, killing over 250 women, men, and children and injuring hundreds more. For the following four months, the government imposed a state of emergency. Hundreds were detained without charge under the Prevention of Terrorism Act.  Anti-Muslim mobs, sometimes linked to nationalist politicians, and incited by extremist Buddhist monks, attacked Muslim property. Mainstream and social media vilified Sri Lankan Muslims and asylum-seekers, putting them at risk of assault.

In November, Gotabaya Rajapaksa was elected president. As defence secretary in the administration of his brother, Mahinda Rajapaksa from 2005-2015, he was accused of numerous crimes, including attacks on journalists and activists, and implicated in alleged war crimes and crimes against humanity.

In May, ethnic Tamil victims’ groups marked 10 years since the end of the war between the government and the Liberation Tigers of Tamil Eelam, with protests and vigils against the government’s failure to address conflict-related violations and provide redress.

In August, President Maithripala Sirisena appointed Maj. Gen. Shavendra Silva as army chief, a move described by United Nations experts as an “affront to victims.” During the last months of fighting in 2009, he led a military division implicated in numerous  war crimes.

President Sirisena announced in June he would end a 43-year unofficial moratorium on the death penalty and resume executions.

Despite agreeing to protect lesbian, gay, bisexual, and transgender (LGBT) people from discrimination, the government did not revoke sections 365 and 365A of the penal code, which criminalize same-sex conduct.

In March, Sri Lanka supported a consensus resolution of the UN Human Rights Council, requesting that the government “implement fully” the measures set out in a previous resolution of 2015, and encouraging “the adoption of a time-bound implementation strategy.” This included a number of commitments to justice and accountability for violations committed during the 26-year civil war, through an office of missing persons, an office for reparations, and by setting up an independent accountability mechanism  including international investigators, prosecutors, and judges.

Despite important initial developments after the 2015 resolution—including lifting severe restrictions on freedom of speech and association, holding consultations, releasing some civilian land held by the military, and re-establishing an independent government human rights commission—progress has slowed considerably.

Commissioners were appointed to the Office for Reparations in April.  The Office on Missing Persons (OMP) began work in 2018, recording over 14,000 cases, but made little progress in discovering their whereabouts. Relatives of the forcibly disappeared protested against the OMP, questioning its authority and independence.

In July, a court acquitted, due to “lack of evidence,” all 13 policemen accused in the 2006 shooting of five Tamil students in Trincomalee in a case known as the “Trinco Five.” The execution-style killing of 17 aid workers in 2006 in Muttur, and the murder of journalist Lasantha Wickrematunge in Colombo in 2009, both of which implicated government security forces, have not resulted in any arrests.

Police identified 14 suspects in the abduction and murder of at least 11 young Tamil men between 2008 and 2009. All of the suspects were naval officers, including the former navy commander, Adm. Wasantha Karannagoda.

Other commitments not met by the government include security sector reform and repealing the draconian Prevention of Terrorism Act (PTA). A Counter Terrorism Act (CTA) to replace the PTA was drafted, but it also contains provisions that would facilitate abuse.

In the aftermath of the Easter Sunday bombings, anti-Muslim mobs  killed one person and caused extensive damage to homes and businesses. About 1,100 Muslim refugees and asylum seekers, including members of the persecuted Ahmadiyya religious community from Pakistan,  were subjected to harassment and threats, forcing them to take shelter in crowded and unsanitary temporary refuges.

Despite previous targeting of Muslims, such as in Kandy district in 2018, the government did not adequately protect vulnerable communities, prosecute attackers, or confront virulent anti-Muslim hate speech.

In May, President Sirisena pardoned Gnanasara Thero, a prominent monk and leader of a militant anti-Muslim organization, who was serving a jail sentence for contempt of court.

Tamils, particularly in the Northern Province, continued to face harassment and intrusive surveillance.

Activists and civil society members, particularly in the north and east of the country, were increasingly subjected to surveillance and harassment. The UN special rapporteur on freedom  of peaceful assembly and association, Clément Nyaletsossi Voulé, reported undue rights constraints.

Some families of people forcibly disappeared during the war reported intimidation by soldiers. The army also disrupted Tamil memorial events. In May, families of the disappeared from Ampara were at a remembrance ceremony when soldiers arrived and destroyed or removed banners and decorations, and threatened to arrest the participants.

Voulé reported concerns that, particularly in the north and the east, associations proposing to work on subjects including LGBTI rights, disappearances, land rights, and post-conflict reconciliation, were denied registration, and were subject to surveillance and intimidation. Activists said that these problems increased after the Easter Sunday attacks.

The government agreed to revise the 1951 Muslim Marriage and Divorce Act. Activists said the amended law should make 18 the minimum age of marriage, without exception, and that women should not have to obtain a guardian’s permission to get married. They also called for a removal of the exemption of penalties for rape of married Muslim girls above the age of 12, and demanded reform in the operation of Qazi courts, which currently have no female judges.

Following the Easter Sunday bombings, the government issued orders forbidding face coverings, especially the veils worn by some Muslim women. Following this order, Muslim women including those wearing other forms of dress, such as headscarves and abayas, faced harassment at work and in public places, and some were denied access to public services such as schools, hospitals, and universities.

President Sirisena’s decision to resume executions of persons sentenced to death was a major setback. The Supreme Court stayed the execution of four prisoners convicted of drug offenses.

The UN High Commissioner for Human Rights strongly criticized the government’s failure to implement its human rights commitments, and warned that “continuing impunity risks fueling communal or inter-ethnic violence, and instability.” Following the appointment of Gen. Silva as army chief, the UN suspended the use of non-essential Sri Lankan troops as peacekeepers.

The core group presenting the UN Human Rights Council resolution (Canada, Germany, North Macedonia, Montenegro, and the United Kingdom) called on the Sri Lanka government to set a clear timeline to meet its commitments, which it said were essential for “national healing, stability and prosperity.”

Sri Lanka has military and security cooperation with the United States, India, and European governments, although the US warned this would be curtailed following Gen. Silva’s appointment. Sri Lankan trade with the EU under the GSP+ scheme,  links better market access to human rights and labor standards. However, the EU, like other foreign partners, has been muted in its response to Sri Lankan rights abuses.

Sri Lanka is a participant in China’s “Belt and Road” Initiative, although there are concerns about the debt burden this is creating, for instance in relation to southern Hambantota Port, control of which has been granted to China for 99 years.