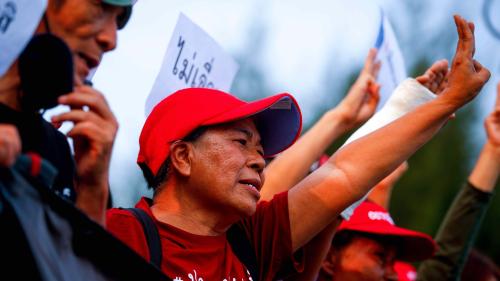 Legacy of Military Rule and Impunity for Human Rights Violations

As the chief of the National Council for Peace and Order (NCPO) junta, Prayut wielded power from 2014 to 2019 that was unhindered by oversight or accountability. While the NCPO disbanded after the new government took office in July, the constitution protects junta members and anyone acting on the junta’s orders from ever being held accountable for human rights violations committed during military rule. No redress is available for victims of those rights violations. The government still has not repealed all of the rights-violating NCPO orders.

Censorship and Restrictions on Free Expression

Outspoken media outlets and reporters faced intimidation and punishment for commentaries critical of the junta. In September, political commentator Chalermchai Yodmalai was fired from the radio program “101 News Angle” on FM101 Radio for alleging corruption at the National Defense College and criticizing military procurement. In March, prominent news anchor Orawan Choodee was removed from the political debate program “Election War 19” on the state-controlled MCOT Channel 9 after she asked questions critical of Prayut and the NCPO junta.

In February, the National Broadcasting and Telecommunications Commission forced Voice TV off the air for 15 days, accusing the station of providing airtime to opposition politicians to criticize the junta. Before the general election on March 24, stories about Thailand on major international news networks including CNN, Al Jazeera, and the BBC were cut off for many days on the main cable television service provider, TrueVisions.

On October 3, Belgian journalist Kris Janssens was detained for about five hours by Thai immigration officers and told not to pursue his investigative story about the string of violent attacks against pro-democracy activists in Thailand.

Even though the junta’s ban on a public assembly was lifted in December 2018, at least 130 pro-democracy activists in Bangkok and other provinces faced illegal assembly charges during the year 2019 under the Public Assembly Act, and in some cases sedition, for peacefully holding rallies and posting Facebook commentaries calling on the junta to fulfill its promise to promptly hold the general election and immediately lift restrictions on freedom of speech, assembly, and association. In July, Bangkok’s Dusit District Court convicted Phayao Akkahad of illegal assembly related to a street performance she staged in December 2018 to demand justice for the death of her daughter during the 2010 political confrontations.

The junta used the Computer-Related Crime Act to make criticism a criminal offense. In April, pro-democracy activist Anurak Jeantawanich was charged with cybercrime for his Facebook commentaries accusing the NCPO of manipulating the general election to allow Prayut to hold onto power. In February, authorities charged Thanathorn Juangroongruangkit and other two leaders of the Future Forward Party with cybercrimes over their Facebook commentaries alleging the junta bribed opposition politicians to join Prayut’s side in the general election.

In October, the military brought a sedition complaint against opposition leaders, academics, and human rights activists, accusing that their seminar about the restive southern border provinces contained distorted information that could lead to chaos, public disobedience, or even unrest in the country. If found guilty, they face up to seven years in prison.

In three instances in June, Thai officials pressured activists, including a foreign satirist, a well-known comedian, and high school students to retract or apologize for videos or photos on social media deemed to ridicule military rule.

In July, famous singer and prominent pro-democracy activist Tanat Thanawatcharanont was released from prison by royal pardon after having served more than five years on lese majeste (insulting the monarchy) charges. At time of writing, there were at least 25 people in detention after being convicted of lese majeste or still awaiting trial. While Thai authorities avoided using the draconian article 112 of the penal code since 2018, they have prosecuted critics of the monarchy using other legal provisions. In X, the government arrested at least 20 members of the anti-monarchy Organization for Thai Federation and charged them with various crimes including sedition, cybercrime, illegal assembly, and criminal association.

Under the civilian government, the military continues to arrest and interrogate people for a wide range of offenses related to national security and detain them without access to lawyers.

Torture has long been a problem in Thailand, but the penal code still does not recognize torture as a criminal offense. Between 2016 and 2018, the National Human Rights Commission of Thailand received more than 100 torture allegations from the deep south provinces of Pattani, Yala, and Narathiwat, where the military routinely uses a combination of the Martial Law Act and the Emergency Decree on Public Administration in a State of Emergency to detain and interrogate suspects for up to 37 days without charge or access to legal counsel. On August 25, Abdulloh Esormusor, an ethnic Malay Muslim rubber farmer who was accused of involving in the insurgency, died after falling comatose in military custody. However, the military continued to summarily dismiss allegations that soldiers tortured or otherwise ill-treated detainees.

Over the past five years, the junta put more than 1,800 civilians on trial before military tribunals. On July 9, Prayut issued NCPO Chief Order 9/2019 providing offenses under the NCPO orders must be prosecuted in civilian courts.

The United Nations Working Group on Enforced or Involuntary Disappearances has recorded 82 cases of enforced disappearance in Thailand since 1980, including prominent Muslim lawyer Somchai Neelapaijit.

In recent years, dissidents who fled persecution in Thailand have faced enforced disappearance in neighboring countries. At least two Thai exiles in Laos, Wuthipong Kachathamakul and Itthipol Sukpaen, were forcibly disappeared in 2016 and 2017 respectively. In 2018, Surachai Danwattananusorn, Chatchan Boonphawal, and Kraidet Lueler were abducted and murdered in Laos. In May, authorities in Vietnam repatriated Chucheep Chivasut, Siam Theerawut, and Kritsana Thapthai to Thailand and the three men have since disappeared.

Thailand signed the International Convention for the Protection of All Persons from Enforced Disappearance in January 2012 but never ratified the treaty. The penal code still does not recognize enforced disappearance as a criminal offense.

Thai authorities engage in practices that facilitate enforced disappearances, such as the use of secret detention by anti-narcotics units, and secret military detention of national security suspects and suspected insurgents in the southern border provinces.

Lack of Accountability for 2010 Violence

Despite evidence showing that soldiers were responsible for most casualties during the 2010 political confrontations with the United Front for Democracy Against Dictatorship (the “Red Shirts”) that left at least 90 dead and more than 2,000 injured, no military personnel or officials from the government of former Prime Minister Abhisit Vejjajiva have been charged for killing or wounding demonstrators or bystanders.

The government has not met its obligation to ensure human rights defenders can carry out their work in a safe and enabling environment. Against the backdrop of a string of brutal attacks in 2019 targeting prominent pro-democracy activists Sirawith Seritiwat, Anurak Jeantawanich, and Ekachai Hongkangwan, the government has done little to better protect them. The government has not seriously investigated these attacks and instead told activists and dissidents to give up political activity if they wanted state protection.

On August 5, prominent environmentalist Eakachai Itsaratha was abducted in Phatthalung province by assailants affiliated with local politicians, who threatened him to stop opposing a rock quarry project planned for the province.

On November 11, the Central Criminal Court for Corruption Cases approved arrest warrants for Chaiwat Limlikit-aksorn and three other forestry officials in connection with the abduction and murder of the prominent ethnic Karen human rights defender Porlajee Rakchongcharoen, known widely as “Billy,” in April 2014. However, the killings of more than 30 human rights defenders and civil society activists since 2001, including land rights activist Den Khamlae, remained unresolved. Military cover-up and shoddy police work hampered the efforts to prosecute soldiers who shot dead teenage ethnic Lahu activist Chaiyaphum Pasae at a checkpoint in March 2017 in Chiang Mai province.

Despite entreaties from civil society advocates, the government did not take concrete action to end strategic lawsuits against public participation (SLAPP) used by government agencies and private companies to intimidate and silence those rights activists and advocates.

The government has not revamped the National Human Rights Commission of Thailand, even after the resignation of two prominent human rights advocates Angkhana Neelapaijit and Tuenjai Deetes meant the commission has not had a quorum since July. The Global Alliance of National Human Rights Institutions rates the commission as substandard because of its selection process for commissioners and its lack of political independence.

Violence and Abuses in the Southern Border Provinces

Since January 2004, Barisan Revolusi Nasional (BRN) insurgents have committed numerous laws-of-war violations. Around 90 percent of the more than 7,000 people killed in the armed conflict in Thailand’s southern border provinces have been civilians. Insurgents expanded their operations by carrying out multiple arson and bomb attacks in Bangkok and Nonthaburi province on August 1 and 2. During the Muslim holiday of Ramadan, insurgents committed at least 21 attacks on civilians in Songkhla, Pattani, Yala, and Narathiwat provinces.

The government has not prosecuted members of its security forces responsible for torture and unlawful killings of ethnic Malay Muslims. In many cases, authorities provided financial compensation to the victims or their families in exchange for their agreement not to speak out or file criminal cases against officials.

Thailand is not a party to the 1951 Refugee Convention or its 1967 protocol. Thai authorities continued to treat asylum seekers, including those recognized as refugees by the UN High Commissioner for Refugees, as illegal migrants subject to arrest and deportation.

In January, outspoken Vietnamese dissident Truong Duy Nhat was abducted by Vietnamese officials with Thai assistance in Pathum Thani after he applied for refugee status with the UNHCR. Thai authorities have failed to investigate the apparent enforced disappearance of Od Sayavong, a refugee from Laos and prominent critic of the Lao government, who was last seen at his house in Bangkok on August 26.

The government refused to let the UNHCR conduct refugee status determinations for Lao Hmong, ethnic Rohingya and Uighurs, and other people from Myanmar and North Korea held in indefinite immigration detention.

In October, the United States government suspended US$1.3 billion in trade preferences for Thailand because of its failure to adequately provide internationally recognized worker rights, such as protection for freedom of association and collective bargaining. This suspension will take effect in April 2020.

While Thailand enacted the Gender Equality Act in 2015, implementation remains problematic due to broad exceptions allowing noncompliance for religious principles or for purposes of national security. Lack of access to remedies also remains a critical issue.

The Ministry of Justice presented a draft civil partnership law, the Life Partners Act, to a public hearing in August. If enacted, the draft law would be an important step towards recognizing the fundamental dignity of same-sex couples and providing them with important legal protections. The current draft, however, still needs improvements to comply with international standards on equality and non-discrimination.

The United States, European Union, Australia, Japan, and many other countries have increasingly moved toward normalization of relations and increased trade with Thailand, even though the March 24 election fell short of being free and fair. Diplomats have spoken out, but have not taken substantive action, about government-appointed and controlled Election Commission of Thailand’s post-election actions to rejigger results and disqualify opposition politicians. Renewed close relations between the US and Thai militaries, including resumption of weapons sales, sent the message that the US disregarded the Thai military’s dismal record on rights abuses.

Most of the communications by the UN Human Rights Council’s special procedures to the Thai government regarding civil and political rights in Thailand under military rule remained unanswered.