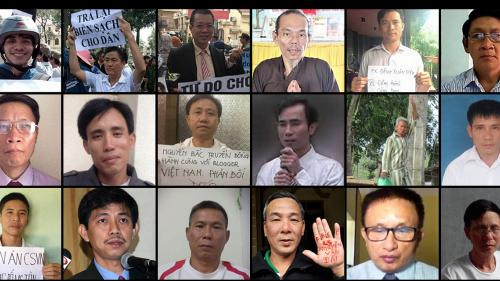 Vietnam did little to improve its abysmal human rights record in 2019. The government continues to restrict all basic civil and political rights, including freedom of expression, association, assembly, and the rights to freely practice beliefs and religion. It prohibits the formation and operation of any organization or group deemed threatening to the Communist Party’s monopoly of power.

In January, Vietnam presented an inaccurate picture of its human rights record during its Universal Periodic Review (UPR) at the United Nations Human Rights Council in Geneva. The government implausibly claimed that it had fully implemented 159, and partially implemented a further 16, of the 182 recommendations accepted at its previous Universal Periodic Review (UPR) in 2014.

Freedom of Expression, Opinion, and Speech

Vietnamese rights bloggers face regular harassment and intimidation. Officials often arrest political critics for their posts on the internet. In 2019, Vietnam put on trial at least 14 people and sentenced them to between five and nine years in prison for “making, storing, disseminating or propagandizing information, materials and products that aim to oppose the State of the Socialist Republic of Vietnam.”

Activists and bloggers face frequent physical assaults by officials or thugs who appear to work in coordination with authorities and enjoy impunity. In January, unidentified men abducted and hooded an anti-corruption campaigner, Ha Van Nam, drove him around in a van while beating him, and then left him outside a hospital with two broken ribs. In June, rights activist Truong Minh Huong was attacked by four men in civilian clothes after meeting with families of several political prisoners. He suffered a broken rib.

In July, a group of rights activists was attacked in Nghe An province while traveling to a local prison to show support for political prisoners there on hunger strike protesting mistreatment. As the activists approached the prison, a large group of plainclothes men attacked them with sticks and helmets, broke their phones, and robbed them. Many were injured, including prominent blogger Huynh Ngoc Chenh and his wife, human rights activist Nguyen Thuy Hanh.

Police routinely place activists under house arrest or briefly detain them to prevent them from participating in meetings and protests or attending the trials of fellow activists. In March 2019, security agents prevented several writers and poets from leaving their houses to attend an award event organized by Van Viet, a literary group operating without government approval. In May, police blocked and prevented friends and colleagues trying to visit blogger Nguyen Huu Vinh, who just completed his five-year prison term. In May, security agents stopped former political prisoners Le Cong Dinh and Pham Ba Hai, and Cao Dai religious activist Hua Phi, from leaving their houses to meet with US diplomats prior to the 2019 US-Vietnam Human Rights Dialogue. In May, 44 activists and bloggers signed a public letter denouncing violations of their right to freedom of movement.

In August, Minister of Information and Communications Nguyen Manh Hung claimed that Facebook had complied with “70 to 75 percent” of the government’s requests to restrict content, up from “about 30 percent” previously. Among the materials Facebook removed, according to the ministry, were “more than 200 links to articles with content opposing the Party and the State.”

The minister also claimed that Google complies with “80 to 85 percent” of its requests to restrict content on YouTube and other Google services, up from “60 percent” previously. The ministry did not disclose the sources of these figures or legal bases for these requests. The ministry said it has asked Facebook to limit some live-streaming capabilities and to “pre-censor” online content and remove ads “that spread fake news related to political issues upon request from the government.”

Facebook told Human Rights Watch that its standards relating to takedowns and geographic blocking of content “are global.” The process for taking down or blocking content, Facebook said in a written communication, is the “same in Vietnam as it is around the world.” Reported content is first reviewed against the company’s Community Standards; if it passes muster, Facebook says it will then assess whether the government request is legally valid under local law and international human rights law.

In May, a court in Dong Nai sentenced two Facebook users, Vu Thi Dung and Nguyen Thi Ngoc Suong, to six years and five years’ imprisonment respectively, for reading and listening to materials on Facebook and distributing leaflets calling on people to protest against China and state oppression. They were charged with possessing materials “that aim to oppose the State of the Socialist Republic of Vietnam” under penal code article 117. Authorities convicted and sentenced rights activists Nguyen Ngoc Anh to six years in prison in June and Nguyen Nang Tinh to 11 years in prison in November, both for their posts on Facebook.

Freedom of Association and Assembly

Under domestic and international pressure, the National Assembly passed a resolution in June to ratify International Labor Convention 98 on collective bargaining and the right to organize.

The government restricts religious practice through legislation, registration requirements, and surveillance. Religious groups are required to get approval from and register with the government, and operate under government-controlled management boards.

In March, a court in Gia Lai province put Ksor Ruk on trial for following an unrecognized Dega Protestant sect and sentenced him to 10 years in prison. Ksor Ruk served a six-year prison sentence between 2005-2011 for the same violation. In August, Rah Lan Hip was convicted by the same court to seven years in prison, also for being involved with Dega Protestantism. In April 2019, police in Dien Bien province reported that they had successfully convinced “163 households including 1,006 people to have renounced an evil religion called ‘Gie Sua.’” In May 2019, the United States Commission on International Religious Freedom published its report in which Vietnam is listed as a “Country of Particular Concern.”

China remains the most influential power on Vietnam. Maritime disputes continue to complicate the bilateral relationship of these Communist Party governments with similar repressive approaches to human rights. In July and August, China’s survey ship Haiyang Dizhi 8 entered waters near Vanguard Bank, which caused protests in Hanoi. Vietnam appeared to benefit from the trade war between the United States and China. During the first eight months of 2019, China rose to become the largest direct investor in Vietnam.

Vietnam’s relationship with the European Union improved significantly. In June, the EU and Vietnam signed the European-Vietnam Free Trade Agreement which will significantly boost trade between the two once ratified by both sides. Over the year, the EU raised concerns over convictions and imprisonment of several rights activists. In June, several members of the European Parliament wrote a letter urging the EU to press the Vietnamese government to improve its rights record.

The United States continues to expand ties with Vietnam. US Navy ships made several ports of call, and Vietnamese officers took part in US-led training, including in the United States. In February, President Donald Trump chose Vietnam as location for a summit with North Korean leader Kim Jong-un. In August, two senior US Air Force generals made a formal visit to the country, among other visits by US military officers as part of bilateral or regional events.

As the most important bilateral donor to Vietnam, Japan continues to remain silent on Vietnam’s long history of rights repression. In May, Minister of Defense Takeshi lwaya visited Vietnam to boost national defense cooperation between the two countries. In July, Prime Minister Shinzo Abe welcomed Prime Minister Nguyen Xuan Phuc in Tokyo. Human Rights Watch learned that human rights issues were not discussed in either meeting.