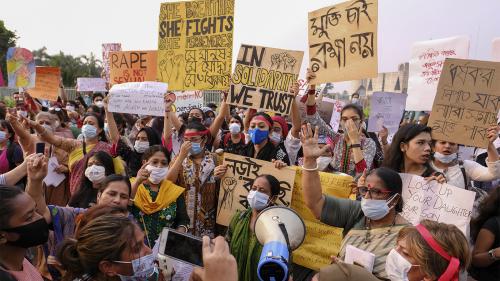 Host to nearly 1 million Rohingya refugees from neighboring Myanmar, Bangladesh kept its commitment under international law not to force returns and allowed ashore refugees stranded at sea who were pushed back by other governments. However, policies over the year violated refugee rights. Authorities arbitrarily detained over 300 refugees on Bhasan Char island, while refusing to allow a safety assessment or protection visit by United Nations experts.

The government took positive steps by restoring internet in the refugee camps, after a nearly year-long internet blackout, and promising to allow refugees to study under the formal Myanmar curriculum through secondary school.

A court ordered the first ever conviction under the 2013 Torture Act, which activists hoped would pave the way for investigations and accountability for the dozens of documented reports of torture by security forces.

Authorities released from detention nearly 3,000 people convicted of minor offenses and granted bail to over 20,000 people being held in pretrial detention in order to reduce crowding and protect against the spread of Covid-19 in prisons. However, those being held in detention for criticizing the ruling party were not included in these releases. Juvenile detention centers granted bail to nearly 500 children in the wake of the pandemic but, according to UNICEF, more than 1,000 children awaiting trial or sentenced for petty crimes remained in detention. 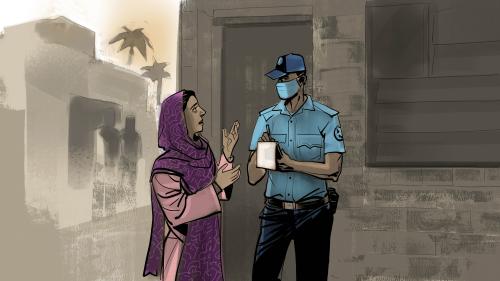 Authorities increasingly used the DSA to harass and indefinitely detain activists, journalists, and others critical of the government and its political leadership. Police even arrested a child under the act for “defaming” the prime minister in a Facebook post.

The international community, including the UN High Commissioner for Human Rights, UN independent experts, and European Union, as well as journalists in Bangladesh repeatedly criticized the DSA for stifling free speech and violating international law. In May, 311 members of Bangladesh civil society issued a joint statement calling for the government to release those held under the DSA.

Authorities also used the Covid-19 pandemic as pretext to censor free speech and the media and threaten academic freedom, arresting artists, students, doctors, political opposition members, and activists for speaking out about the government’s handling of the pandemic.

The government silenced healthcare workers and cracked down on those who spoke out over a lack of personal protective equipment (PPE) and resources for treating Covid-19. In May, the government issued a circular banning all government employees from posting, “liking,” sharing, or commenting on any content which might “tarnish the image of the state” or the government’s “important persons.”

The government censored media by blocking news sites and dropping the media from the list of emergency services that remained exempt from lockdown restrictions. In August, the Cabinet approved a draft amendment to the 2017 National Online Media Policy, requiring all media outlets to obtain government approval to run their online media portals.

The government increased surveillance, including by creating two units to identify Covid-19 “rumors”—one under the Information Ministry and another under the Rapid Action Battalion (RAB), the country’s primary counterterrorism unit, notorious for abuse and flouting rule of law. In reality, these initiatives primarily led to the arbitrary arrest of individuals who spoke out against the government’s response to the pandemic or were otherwise critical of the ruling party.

The government continued to deny its unlawful practice of enforced disappearances and ignored concerns raised by the UN Working Group on Enforced or Involuntary Disappearances, the UN Committee against Torture, and the UN Human Rights Committee. Authorities continued to forcibly disappear critics and deny justice for victims and their families.

Shafiqul Islam Kajol, a journalist, was forcibly disappeared for 53 days before he was “found” in a field, blindfolded and tied. Rather than investigating his disappearance, authorities arrested him under three separate DSA cases.

Security forces continued to commit extrajudicial killings with near-complete impunity. However, when police killed a retired military officer, Maj. Sinha Rashed Khan, authorities were forced to take action and “crossfires”—a euphemism for extrajudicial killings in Bangladesh—dropped precipitously, indicating that authorities can bring these killings to an end whenever they choose.

Bangladesh’s healthcare system was overwhelmed by the Covid-19 pandemic, shedding light on massive disparities in healthcare access. Many people with symptoms consistent with Covid-19 initially reported being turned away from hospitals. Healthcare workers reported that they did not have sufficient PPE to safely provide medical care.

Doctors told Human Rights Watch that they were overwhelmed and under pressure to reserve limited intensive care facilities for patients with clout or influence. Delivery of essential sexual and reproductive health services fell to the wayside, putting women and girls’ health at increased risk.

With Myanmar failing to create conditions for their safe and voluntary return, Bangladesh continued to host nearly 1 million Rohingya refugees. However, with their welcome wearing thin, the government’s policies violated basic rights, including by building barbed wire fencing around the camps and shutting off internet access for nearly a year, which violated rights to freedom of expression and access to information and hampered aid workers’ ability to coordinate emergency responses, conduct contact-tracing, and share critical information about Covid-19.

In August, the government reiterated a promise made in January to finally allow Rohingya children access to formal education under the Myanmar curriculum, but the initial “pilot” plan to reach 10,000 children, up to class 9, has yet to be implemented.

Bangladesh rescued two boats of Rohingya refugees in May after other governments pushed them back to sea for months. However, the government placed the refugees at risk by holding them on the remote silt island of Bhasan Char, initially saying that it was only a temporary quarantine to prevent the spread of Covid-19. However, over six months later, the government had refused to allow the refugees to return to their families in Cox’s Bazar or for UN officials to conduct a protection visit.

Refugees on the island described being held without freedom of movement or adequate access to food or medical care; some alleged that they were beaten and ill-treated by Bangladesh authorities on the island. The government ignored calls from UN Secretary-General António Guterres and humanitarian experts to safely return the refugees to the camps in Cox’s Bazar.

Following massive order cancellations during the pandemic, more than 1 million garment workers—mostly women—were laid off, many of whom did not receive payment of owed wages. Retailers took advantage of the crisis by demanding discounts on producer prices, thus putting pressure on workers to return to work for lower wages, often without adequate PPE, reliable healthcare, or sick leave.

The government provided US$600 million in subsidized loans to companies to support payment of wages to workers in the garment sector. It is unclear, however, how the payments of back wages were made to workers, particularly women who may not have financial control or access.

Women and girls faced widespread violence. According to Bangladesh human rights organization Ain O Salish Kendra, 975 women and girls were reportedly raped in the first nine months of 2020, and 235 women were murdered by their husband or his family. NGOs reported a marked increase in reports of domestic violence during the nationwide lockdown instituted to stop the spread of Covid-19. Yet, survivors faced further reductions to already limited options for safe shelter or other protection measures as well as significant obstacles to legal recourse.

Despite promises, the government failed to pass a long overdue sexual harassment law or make amendments to the discriminatory rape law. Instead, the government hurriedly approved an amendment to allow for the death penalty for rape to quell protests that broke out after several gang-rape cases came to light.

Prime Minister Sheikh Hasina committed to end marriage for girls under 15 by 2021, but there was little meaningful progress during the year. Instead, a special provision remained in effect that allows for child marriage in “special cases,” with permission of their parents and a court.

Section 377 of the Bangladeshi penal code punishes “carnal intercourse against the order of nature” by up to life imprisonment.

Though the government took an important step in recognizing hijras as a third gender, in practice, it remained difficult for hijras to access health care and other government services, a problem exacerbated during the Covid-19 pandemic. Lesbian, gay, bisexual, and transgender people and advocates in Bangladesh continued to face violence and threats of violence without adequate protection from the police.

In positive steps, the National Human Rights Commission formed a committee to address issues for marginalized groups, including transgender people, and the National Curriculum and Textbook Board of Bangladesh agreed to incorporate third gender issues into the secondary school curriculum.

Activists continued to call for the full implementation of the Peace Accord in the Chittagong Hill Tracts.

Two years after the disappearance of Michael Chakma, an Indigenous rights activist, the government has ignored appeals from his family, as well as inquiries from the High Court, the National Human Rights Commission, and the United Nations Committee against Torture. In January, the police finally responded to an order from the High court by simply stating that they “could not find anybody named Michael Chakma in any prisons in Bangladesh.”

The European Union, which accounts for over 60 percent of Bangladesh’s garment exports, warned of its readiness to withdraw important trade preferences if Bangladesh continued to flout human rights obligations, particularly labor rights. A European Commission ombudsman report in March decided against a complaint by labor unions calling for the EU to begin withdrawing trade preferences, but said that option “remains open.” Citing the economic impact of the Covid-19 pandemic, Bangladesh applied for a continuance of the trade preferences beyond 2024, when it is expected to graduate from least developed country status and would lose zero duty benefits.

In March, the EU welcomed the release of opposition leader Begum Khaleda Zia, which the bloc had advocated for.

The Bangladesh government ignored or dismissed key recommendations by the United Nations and others, particularly with regard to its crackdown on free speech under the DSA and increasing cases of enforced disappearances and killings. Bangladesh failed to submit a requested follow-up report to the Committee against Torture’s review of its practices.

India failed to speak up against human rights violations in Bangladesh, even when journalist Shafiqul Kajol was found at the border after being forcibly disappeared for nearly two months.

China blocked international efforts to hold the Myanmar military accountable for grave abuses against the Rohingya, and instead continued to push for repatriation and supported Bangladesh’s initiatives to relocate refugees to Bhasan Char island. Bangladesh accused Myanmar of failing to create conditions that would enable the safe and voluntary return of Rohingya refugees.

The International Monetary Fund (IMF) approved emergency loans totaling US$732 million to Bangladesh to help address the impact of the Covid-19 pandemic. The government committed to the IMF to conduct an audit within 12 months of receiving the loan and to publish all Covid-19-related procurement contracts. The World Bank provided a fast track loan of $1 million for its Covid-19 Emergency Response and Pandemic Preparedness Project and approved another $1.05 billion for economic stimulus projects. The United States provided over $56 million and the EU provided over $388 million in aid to Bangladesh in response to the Covid-19 pandemic.