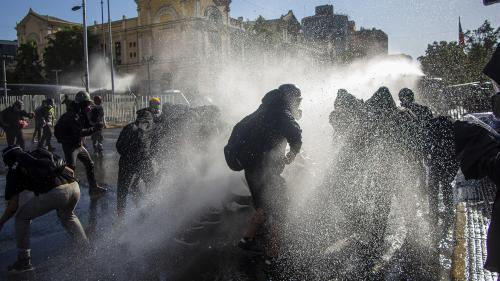 Chile’s national police—the Carabineros—used excessive force in responding to massive demonstrations, some of them violent, in 2019. Thousands of people were injured or reported serious abuses in detention, including brutal beatings and sexual abuse. While initial steps have been taken to reform the police, structural changes to prevent police misconduct and strengthen oversight and accountability are still pending.

President Sebastián Piñera’s administration established a state of emergency on March 18 to curb the spread of Covid-19, and extended it throughout the year.

On October 25, an overwhelming majority (78 percent) voted to establish a constituent assembly to rewrite the constitution.

Massive, mostly peaceful, protests over public services and economic inequality erupted across Chile in October 2019. Some demonstrators threw rocks and Molotov cocktails at police and burned public and private property. Some people took advantage of the chaos to loot. Police responded using excessive force against demonstrators and bystanders, whether they were engaged in violence or not.

From October 18 to November 20, 2019, almost 11,000 people were injured, including 2,000 officers, and 26 people died. More than 15,000 people were detained, and some suffered ill-treatment. Several people suffered eye injuries, most hit by pellets that police fired from anti-riot shotguns.

Protests started again in Santiago in February, after police killed a 37-year-old in a hit and run after a soccer match. The same month, seven police officers were discharged and five were placed in pretrial detention for beating an 18-year-old protester. In October, the Prosecutor’s Office opened a criminal investigation—ongoing at time of writing—and detained a police officer accused of causing the fall and injury of a 16-year-old protester from a bridge, as Carabineros were dispersing a demonstration.

In June, Carabineros said they had opened 1,228 administrative investigations into possible abuses against protesters. Of those, 173 resulted in disciplinary action, including the expulsion from the force of 14 officers. In September, the Comptroller’s Office pressed charges in an administrative proceeding against seven police generals for not complying with use of force protocols.

Chile has taken preliminary steps to reform the police, in response to abuses. A council convened in December 2019, by the Ministry of Interior and a Senate commission issued recommendations in the first months of 2020 to overhaul the institution, including by improving transparency, training, and accountability.  At time of writing, a new unit for Carabineros reform under the Ministry of Interior had been tasked with implementing those recommendations.

In addition, there were at least four reform bills pending in Congress to modernize security forces. However, the bills do not go far enough in overhauling the Carabineros disciplinary system to ensure accountability for abuses.

Chile maintains a 50-year secrecy order that seals from the public testimony provided by victims before the National Commission on Political Prison and Torture from November 2003 to May 2004. The testimony revealed places of detention and torture methods. Former President Michelle Bachelet’s administration (2014-2018) submitted a bill to lift the secrecy order in 2017. At time of writing, the order had been set aside in approximately 15 cases, allowing access to files with testimonies, photographs, and press releases.

On March 6, a Chilean court convicted 31 former agents for their role in the 1974 disappearances of moviemakers Carmen Bueno Cifuentes and Jorge Muller Silva during the security forces’ Operación Colombo, in which they forcibly disappeared 119 political prisoners. On September 9, another Chilean judge ordered reparations for a woman arbitrarily arrested and tortured by Carabineros in 1984.

Chile’s 28-year total abortion ban ended in 2017 when the Constitutional Court upheld a law decriminalizing abortion under three circumstances: when a pregnancy results from rape, the life of a pregnant woman is at risk, or the fetus is unviable. The law, in its current form, allows doctors and private institutions to refuse to provide abortions for reasons of conscientious objection.

Significant barriers to access remain, even for legally permissible abortions. Measures to curb the spread of Covid-19, including a lockdown, have negatively impacted access to comprehensive sexual and reproductive health, including access to abortion, according to local groups.

In 2019, Chile outlawed sexual street harassment, including verbal assaults, groping, stalking, and indecency, which are now punishable by fines or prison time.

Long-standing confrontations between the government and Mapuche land-rights activists continue. The Mapuche represent 87 percent of the Indigenous population of the country.

In June, Mapuche leader Alejandro Treuquil was shot to death by unidentified assailants. According to his family, the incident is related to threats he received from Carabineros and paramilitary groups.

In August, clashes broke out between Mapuches and anti-indigenous groups. Police in five municipalities intervened to clear local government buildings that Mapuches had occupied in support of a jailed leader’s hunger strike.

In September, the Piñera administration created the Wallmapu Committee to discuss territorial, collective, and social development of native communities.

Indigenous communities see the pending revision of the constitution as an opportunity for recognition, including of land claims.

A gender identity law took effect in December 2019. It allows transgender people over 14 years old to change their name and gender in the civil registry without undergoing surgery. Married people, however, must divorce before exercising their right to legal gender recognition.

In January, the Senate voted to consider a 2017 bill to legalize same-sex marriage and allow same-sex couples to adopt children and pursue other reproductive options. In October 2020, a Committee in the Senate approved the majority of the articles in the bill. It remained pending at time of writing.

In June, the Constitutional Court denied a petition filed by a lesbian couple who were married in Spain and have a child to have their marriage recognized in Chile. The court held that that Chilean law, in its denial of marriage rights to same-sex couples, does not discriminate.

Immigration laws have not been updated since 1975. For several years, an immigration bill has been stalled in the Senate. The bill would establish long waiting periods to obtain social benefits, provide few avenues for challenging deportation orders, and prohibit changing legal status from within Chile. In April, the government announced that the stalled immigration bill was a high priority. At time of writing, it remained pending.

The government estimated that 1.5 million foreigners were living in Chile, as of March— more than a third (472,000) of them from Venezuela. Chile publicly welcomed Venezuelans, but rules for obtaining visas include requirements that make it hard for some to obtain legal status.

The Piñera administration has taken several steps to overhaul the flawed National Service for Minors (SENAME). However, complaints against SENAME continued. In August, a SENAME residence worker in Valdivia was accused of mistreating children and suspended. In September, a judge in Valparaiso ordered pretrial detention of a man charged with six counts of prostitution, sexual harassment, and assaults against children in SENAME residences. In November, two children were wounded when police fired shots inside a SENAME center in Talcahuano, pushing the head of Carabineros, Mario Rozas, to resign.

At time of writing, two bills were pending in the legislature to strengthen children’s rights protections. One seeks to replace SENAME.

In 2019, the statute of limitations on sex crimes against children was removed.

In March, schools closed to curb the spread of Covid-19, affecting the education of 3.5 million students. The Ministry of Education implemented an online platform for students to access educational content. According to the ministry, 89 percent of students in high-income households have access to online education, but only 27 percent in low-income households do. Despite an attempt to reopen classes in the metropolitan region at the beginning of October, some schools did not receive any students, and others no more than 11 pupils.

Overcrowding and prison violence endanger Chile’s detainee population of approximately 40,000 people. A 2019 report by the National Human Rights Institute showed 19 of 40 prisons above capacity in 2016 and 2017.

A bill presented by the government in 2018 to grant house arrest to individuals convicted for any crime, including human rights violations, who have a serious, lifelong, or terminal illness or are over 75 years old, and have served at least half of their sentence, is still pending before the senate.

Chile took steps to reduce prison overcrowding to curb the spread of the coronavirus. In April, Congress approved a bill introduced by the Piñera government allowing, at time of writing, 1,568 of 27,411 convicted prisoners to serve the remainder of their sentences under house arrest. Additionally, 1,778 of 14,546 pretrial detainees were placed under house arrest or other alternatives to detention—the most significant effort to reduce prison overcrowding in Latin America in response to Covid-19.

As of June, at least 493 prisoners and 631 officers had contracted Covid-19, and four people had died.

In September, the House of Representatives passed a bill that would criminalize protected speech of people who “justify,” “approve” of, or “deny” the human rights violations committed during the country’s dictatorship, punishing them with up to three years in prison, if they “disturb the public order” or “illegitimately obstruct or limit” others’ exercise of their rights. The Senate had yet to approve the bill at time of writing.

In January, the Inter-American Commission on Human Rights (IACHR) visited Chile to observe first-hand the human rights situation following the October 2019 protests, and to assess the causes and consequences of the unrest. Among other reforms, the IACHR recommended that Chile take measures to end excessive use of force and ensure access to justice for people whose rights have been violated.

The IACHR submitted the free-speech case of lawyer and environmental activist Carlos Barona Bray to the Inter-American Court of Human Rights (IACtHR) in September. Barona Bray was found guilty in a criminal defamation lawsuit filed by a public official.

The IACtHR held a public hearing in January on Judge Daniel Urrutia Laubreaux’s case. The judge brought his case to the commission in 2005, arguing that the Supreme Court violated his right to freedom of speech when it sanctioned him for criticizing in an academic paper the court’s actions during the Chilean military regime.

Chile maintained a strong stance criticizing abuses by the Nicolás Maduro government in Venezuela. It participated in all Lima Group statements and welcomed the report issued in September by the United Nations Fact-Finding Mission on Venezuela.