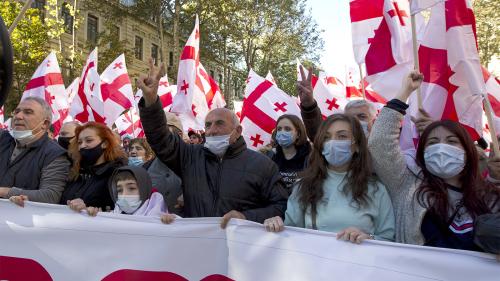 Political tensions rose in Georgia following the October 31 parliamentary elections. The ruling Georgian Dream (GD) party maintained a parliamentary majority amid allegations of fraud, prompting the opposition to boycott the new parliament. International observers, led by the Organization for Security and Co-operation in Europe (OSCE), concluded that the elections were held in a competitive environment, but marred by “widespread allegations of voter pressure.”

Georgia went into lockdown shortly after announcing its first confirmed Covid-19 case at the end of February. It declared a state of emergency, closed borders and airports, restricted movement inside the country, and closed all educational institutions, affecting close to 600,000 school children. Authorities imposed a nationwide curfew, locked down the four largest cities, and managed to contain the virus at low levels in the initial months.

The pandemic had a devastating impact on the economy, which shrunk by over 16 percent in the second quarter, resulting in a spike in unemployment and poverty. To mitigate the fallout, the government enacted a US$1.5 billion anti-crisis plan in April, including a social assistance package for individuals, and tax relief and exemptions for businesses for at least six months. Three months before the October elections, the government announced additional anti-crisis measures of US$132 million, including a further social assistance package. Opposition and some civil society groups saw the steps as “manipulation to attract voters.”

The state of emergency ended on May 23. But a day earlier, citing the ongoing Covid-19 pandemic, parliament granted the government the power to restrict certain rights, such as freedom of movement, freedom of assembly, as well as property, economic, and labor rights without declaring a state of emergency until July 15. The parliament later extended this through the end of 2020. Human rights groups in Georgia noted that the manner of this granting of extensive government power without parliamentary oversight was incompatible with the Constitution.

Although GD’s electoral victory allowed it to maintain its parliamentary majority, opposition parties rejected the outcome, called for snap elections, and at time of writing, were boycotting their seats in the new parliament. The OSCE found that the vote respected fundamental freedoms but was marred by a “blurring of the border between the ruling party and the state.” Local election-monitoring groups called it “the least democratic and free among elections” held under GD rule. They criticized election-day incidents such as verbal and physical confrontations against journalists and observers, numerous cases of breach of voting secrecy, and vote-buying. On November 8, police used water cannons, without warning, against dozens of peaceful protesters who had gathered outside the central election commission building to protest alleged election violations.

Parliament modified its mixed electoral system following months of protests that started in 2019, and lengthy negotiations between the GD and opposition parties. The reform decreased the number of single-mandate seats and increased proportional representation to 120 deputies in the 150-member legislature.

The State Inspector’s Office, an independent body created in 2018 to investigate abuses committed by law enforcement, became operational in November 2019. By August, the office received over 1,300 reports of alleged abuses by law enforcement and other officials and launched criminal investigations in 168 cases, mostly into abuse of authority, but also inhuman and degrading treatment. In the same period, the Ombudsman’s Office received 68 complaints of ill-treatment by prison staff or police.

Lack of accountability for law enforcement abuses persisted, particularly with regard to incidents that took place before the State Inspector’s Office became operational. The investigation into June 2019 events, when riot police fired rubber bullets and used tear gas against thousands of protesters outside the parliament building in Tbilisi, continued to be largely one-sided. According to the public defender, who was allowed to monitor the proceedings, the investigation “only focused on the offenses committed by rank-and-file police officers but failed to objectively or fully assess command responsibility.”

In February, dozens of employees of Adjara TV and Radio company, a publicly funded broadcaster based in Batumi, held a silent protest in the channel’s newsroom to protest the new management’s alleged interference with the broadcaster’s editorial policy. The ruling party members had openly expressed discontent with editorial policy under the previous management. In March, the new management dismissed one of the organizers of the silent protest, Teona Bakuridze, anchor of the broadcaster’s main news program, allegedly for “gravely violating” the broadcaster’s internal regulations. Reporters without Borders (RSF) condemned Bakuridze’s dismissal and called on the Georgian authorities to “stop political pressure” on Adjara TV.

Later in May, Adjara TV’s director Giorgi Kokhreidze fired Malkhaz Rekhviashvili, host of a talk show and head of the Alternative Trade Union of Adjara TV. Rekhviashvili said that he was dismissed for his Facebook posts that criticized disciplinary measures against his colleagues. Management claimed the posts discredited the TV channel. On July 30, the new management fired three more employees, including two active members of the Alternative Trade Union who also organized a protest four days earlier against its editorial policies. The employees were later reinstated after more than 280 Adjara TV employees signed a petition demanding they be allowed to return.

In July, the State Security Service initiated an investigation into an alleged act of sabotage in connection with a story aired by the pro-opposition Mtavari Arkhi. The story alleged that local officials had falsified Covid-19 data and were engaged in other misconduct. Local human rights groups regarded the investigation as a dangerous precedent for interference with freedom of expression, especially considering the authorities’ negative attitude towards Mtavari Arkhi’s editorial policies.

In July, parliament amended the Law on Electronic Communications, giving the Communications Commission, the broadcasting and communications regulatory body, the power to appoint a "special manager" to oversee any electronic communications company that fails to enforce the commission’s decisions. The law authorizes such “special managers” to make any managerial decision, except those regarding selling the company’s shares. The Media Advocacy Coalition, an alliance of local watchdog groups, and Reporters without Borders criticized the law for restricting broadcast media freedom. The Communications Commission said the bill only affects mobile and internet providers, not media or broadcasting.

Workplace safety and decent labor conditions remain a persistent problem. According to the Georgian Trade Union Confederation, 22 workers died and 110 were injured in work-related accidents through September.

In June, several hundred coal workers in Tkibuli organized protests after 22 miners got stuck in a mine for several hours due to a malfunctioning elevator. Earlier in March, three miners from the same company were hospitalized because of gas poisoning in a mine.

Several dire cases highlighted how the economic fallout from Covid-19 exacerbated poor living arrangements for transgender people, many of whom work in the informal sector. In April, transgender women held a protest asking for the government’s assistance, as they lost their income and means to cover their rent. At the protest, a 19-year-old transgender woman attempted suicide by self-immolation in a desperate effort to draw attention to the lack of government social support for transgender people. Local human rights groups also criticized the government’s Covid-19 related Anti-Crisis Economic Plan for failure to address the social needs of transgender women and queer people, many of whom lack alternative means of support due to family rejection and social opprobrium.

Authorities maintained harsh drug laws that can be used to prosecute people for mere possession or consumption (except for marijuana) of drugs for personal use.

In June, the Constitutional Court ruled as unconstitutional, imprisonment for possession of drugs in quantities that are too small to cause intoxication. However, draft legislative reform that would have introduced public health approaches to drug use and largely overhaul punitive practices remained stalled in parliament.

In March, OSCE Representative on Freedom of the Media Harlem Désir expressed concern about developments at Adjara TV, and “about reported management’s interference in its editorial policy.”

In a May joint statement, the United Nations, European Union (EU), and Council of Europe (CoE) representatives in Georgia, together with the ambassadors of 21 countries, urged Georgian officials to address LGBT rights during the Covid-19 pandemic and beyond.

In July, the EU delegation in Georgia welcomed the adoption of the election reform package and expressed regret that Georgia did not use this opportunity to address other electoral shortcomings, such as voter intimidation, dispute resolution, and commission compositions.

In September, the EU and US ambassadors in Georgia also welcomed adoption of the labor reforms as a step towards delivering on EU commitments.

In September, the European Parliament adopted a report on the implementation of the EU’s Association Agreement with Georgia, positively assessing Georgia’s progress in adopting reforms and calling on the authorities to “refrain from pursuing politically-motivated cases” against opposition, to reform selection procedures for judges, and to investigate all incidents of excessive use of force by law enforcement.

In October, the EU expressed concerns over the adoption of legislative amendments on the selection process of Georgia’s Supreme Court judges prior to the publication of the urgent Venice Commission Opinion on the legislation.

In November, US Secretary of State Michael Pompeo visited Georgia to discuss, among other things, Georgia’s post-election political crisis, the state of its judiciary, and the US-Georgia partnership.

The International Criminal Court (ICC) continued its investigation into war crimes and crimes against humanity committed during the August 2008 Russia-Georgia war over South Ossetia. The ICC’s Trust Fund for Victims approved an assistance program to provide victims of the 2008 war with medical treatment and material support over the next three years.