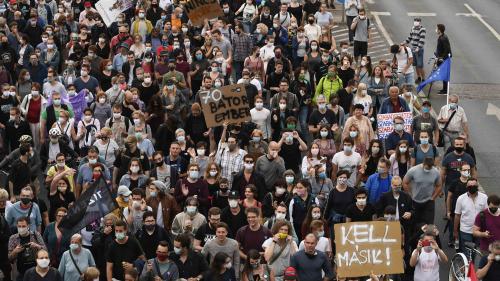 The government used the Covid-19 pandemic as a pretext to continue its attacks on rule of law and democratic institutions. The government declared a state of emergency in March, seizing unlimited power to rule by decree without parliamentary and judicial review. Before the state of emergency was revoked in mid-June, the government had issued hundreds of decrees, including on issues unrelated to public health. The government made access to asylum close to impossible, interfered with independent media and academia, launched an assault on members of the lesbian, gay, bisexual, and transgender (LGBT) community, and undermined women’s rights. Hungary’s Roma minority continue to face widespread and systemic discrimination.

In its Rule of Law report released in October, the European Union Commission raised concerns about the lack of independence of the judiciary, intimidation of independent media, and the impact of the weakening of independent institutions and pressures on civil society on democratic checks and balances. 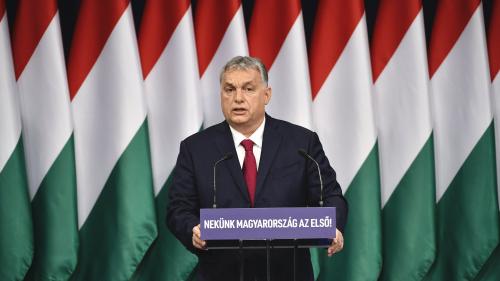 Attacks on Rule of Law

In March, the government declared a state of emergency in response to the pandemic and the parliament, where the ruling party has a two-thirds majority, passed an Authorization Act giving the government unlimited power to rule by decree indefinitely and without parliamentary oversight. The law also included a new criminal offense for the publication of “fake” or “distorted facts” pertaining to the pandemic.

The government adopted hundreds of decrees before the Authorization Act and state of emergency were revoked in mid-June, including several unrelated to public health, such as decrees that stripped funds to municipalities, disproportionally affecting localities ruled by opposition parties. The ruling Fidesz party had suffered a major blow in the October 2019 local elections when the party lost 10 larger cities to the opposition, including the capital city, Budapest.

While the Authorization Act was revoked in mid-June, Parliament simultaneously adopted a new law enabling the government to declare future public health or medical emergencies during which it could order any and all measures it deems necessary without parliamentary approval, including suspending laws and curtailing fundamental rights such as freedom of movement and assembly for six months. These powers are renewable every six months with minimal or no parliamentary or judicial oversight.

In March, the government amended the criminal code to make it a crime to spread “fake news” or engage in “fear mongering” during a pandemic punishable by up to five years’ imprisonment. At the time, Harlem Desir, then media freedom representative for the Organization for Security and Co-operation in Europe (OSCE), called on the government to ensure that the Authorization Act should not impede the work of media in Hungary. By July, police had launched 134 criminal investigations concerning “fear mongering.” A majority of cases concern people who expressed critical comments on social media regarding the government’s handling of the pandemic. At time of writing, investigations were ongoing.

In July, Szabolcs Dull, the editor-in-chief of the largest online independent daily, Index, was fired as a result of a financial takeover of the company controlling Index’s revenue streams. The new owner has close links to Prime Minister Viktor Orban and his government. Index’s entire staff resigned in protest. In September, the Media Council, a regulatory body the members of which are appointed by the ruling party, revoked the frequency for Klubradio, an independent radio station in Budapest, entering into effect in February 2021. The Media Council justified its actions referring to Klubradio’s repeated breaches of the media law. Klubradio denied the allegations.

In October, the Court of Justice of the European Union (CJEU) ruled that a 2017 law that effectively forced the George Soros funded Central European University to leave Budapest and relocate in Vienna, violated European Union law.

Nonetheless, the government’s efforts to control academic institutions continued. A law adopted in June, which entered into effect in September, effectively abolished the autonomy of the University of Theatre and Film in Budapest, depriving its highest governing body of decision-making power over budgetary, organizational, and staffing issues. The Ministry of Technology and Innovation single-handedly appointed the members of the new board of trustees and the supervisory body—all closely linked to the government and with limited to no knowledge of the arts.

Long-standing neglect of the public health care system and deficiencies in Hungarian hospitals, including lack of basic items such as hand soap and sanitizer, may have contributed to the spread of Covid-19. According to the Chief Medical Officer, as of July 12, 1,062 patients had contracted Covid-19 in hospitals, of whom 260 died. That means that 25 percent of reported confirmed infections by mid-July were contracted in hospitals, and hospital-acquired Covid-19 infections led to almost 50 percent of reported deaths.

Medical staff reported difficulties accessing adequate amounts of personal protective equipment and confusing protocols for referring suspected Covid-19 patients for testing. By September, Hungary had the third lowest rate of testing for Covid-19 in the EU.

In April, a government order required all hospital directors to free up two-thirds of all hospital beds in public hospitals to make room for a possible surge of Covid-19 cases, resulting in an unknown number of patients, many needing around-the-clock care, to be sent home to care for themselves. In response to concerns about patients forcibly removed from hospitals raised by the UN special rapporteurs on health and on poverty, the government denied any wrongdoing, saying the rapporteurs were “wasting our time by attacking Hungary based on false allegations” and were “spreading fake news.”

The government continued to undermine women’s and LGBT rights. In May, the parliament blocked the ratification of the Council of Europe Convention on Combating Violence Against Women and Domestic Violence, known as the Istanbul Convention, saying it “promotes destructive gender ideologies” and “illegal migration.”

Hungary signed the convention, which mandates government measures to prevent domestic and gender-based violence, protect survivors, and prosecute perpetrators, in 2014. Also, in May, a new law made it impossible for transgender or intersex people to legally change their gender—putting them at risk of harassment, discrimination, and even violence in daily situations when they need to use identity documents. Council of Europe Human Rights Commissioner Dunja Mijatovic, called the law “a blow to the human dignity of trans people” and said it contradicted the case law of the European Court of Human Rights.

The country saw a significant decline in asylum applications in 2020 due to border closures and other restrictions. By July, 95 people had filed for asylum, down from 266 people in the first 7 months of 2019; authorities granted some form of international protection to 113 people. Pushbacks from Hungary to Serbia, sometimes violent, continued.

Following a May ruling from the CJEU that automatic and indefinite placement of asylum seekers in transit zones on the Hungary-Serbia border amounted to unlawful detention, the government dismantled the transit zones and transferred approximately 400 asylum seekers to the only two open reception centers in Hungary. Authorities had already suspended asylum seekers’ access to the zones in March, using the pandemic as a pretext.

In June, the government rammed through a law abolishing the right to seek asylum on Hungarian territory and requiring asylum claims be lodged at specifically designated embassies in non-EU countries. If granted access to the territory, the asylum seeker, including children, will be placed in automatic detention for 30 days with no possibility to appeal their detention. According to the Hungarian Helsinki Committee, as of late July, only seven people—all members of the same family—had applied under the new restrictive system; their application was rejected.

In October, the EU Commission initiated legal action against Hungary on grounds that the new procedures breach EU asylum law.

As of September, the government re-introduced further border closures in response to rising Covid-19 infections, barring entry to most non-Hungarian citizens. Exceptions made for citizens from Czech Republic, Slovakia, and Poland were criticized by the European Commission as discriminatory and contravening the principle of free movement within the EU.

Roma continue to be discriminated in workplaces and schools and many live in abject poverty. In January, following a lower court decision ordering €275,000 (US$327,112) in damages to 60 Roma students who had been unlawfully segregated in primary school, Prime Minister Orban said the ruling was an affront to people’s sense of justice when “members of an ethnically dominant ethnic group can receive a significant amount of money without doing any kind of work.” In May, the Supreme Court upheld the lower court’s decision.

In June, the CJEU ruled that a 2017 law requiring civil society organization receiving over €20,000 ($23,790) from outside of Hungary to formally register as foreign-funded, was contrary to EU law. At time of writing, the government had taken no action to implement the CJEU ruling and revoke the law.

Civil society organizations and lawyers continued to work on behalf of migrants and refugee rights despite a controversial 2017 law criminalizing aid and assistance to asylum seekers, refugees and migrants. At time of writing, nobody had been charged under the law.