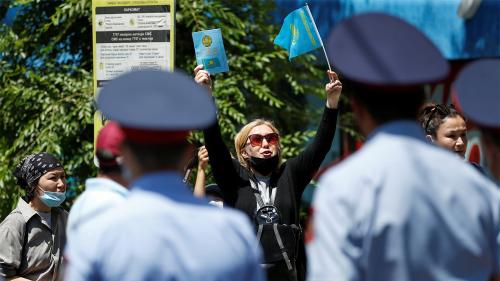 Although authorities hailed a new public assemblies law, signed by the president in May, as a reform, the law imposes onerous rules, bans spontaneous protests, and prohibits unregistered groups and some people with disabilities from organizing protests. Authorities allowed an opposition rally in mid-September and a rally for political reforms on October 31 to proceed, but hundreds of people who tried to exercise their right to peacefully protest on other occasions in 2020 were detained, fined, or sentenced to short-term custodial sentences for administrative offenses.

On August 12, an Almaty court convicted the activist Asya Tulesova of insulting the police and using violence against a police officer, fined her, and placed restrictions on her freedom of movement for 18 months. Tulesova had angrily confronted the police, knocking off an officer’s hat, in response to police forcefully detaining dozens of people at a peaceful protest on June 6.

An Almaty court on June 22 convicted political activist Alnur Ilyashev of “disseminating knowingly false information” for social media posts criticizing the majority Nur Otan party. The court imposed restrictions on his freedom of movement and required him to serve 100 hours’ community service annually for three years and banned him from civic activities for five years.

Police on February 24 announced the death in custody of Dulat Agadil, an outspoken government critic who had participated in numerous unsanctioned protests. Officials cited acute heart failure as the reason, but the suspicious circumstances of his death prompted protests and calls for an independent investigation, which authorities are obligated to conduct under human rights law.

Authorities on March 3 paroled Mukhtar Dzhakishev, former head of the state-owned energy agency Kazatomprom. He had served nearly 11 years in prison on embezzlement and fraud charges. His allegations of torture were never investigated.

Journalists in Kazakhstan face harassment, arrest, and prosecution for carrying out their work. Authorities retaliated against journalists and others who criticized the authorities’ response to the Covid-19 pandemic. A judge in April sentenced a man to 10 days in detention for uploading a video to Facebook showing long lines of people waiting for social assistance during the pandemic.

According to Adilsoz, a local media watchdog, between January and July, seven journalists were physically attacked, and 21 journalists, bloggers, and activists were detained, seven of whom while reporting. Adilsoz reported that authorities brought 38 criminal cases against journalists for alleged crimes such as spreading false information, defamation, and incitement.

In June, Kazakhstan decriminalized defamation. The Organization for Security and Co-operation in Europe (OSCE) Representative on Freedom of the Media Harlem Désir welcomed the development and urged the authorities to also decriminalize “insult” and “disseminating knowingly false information.”

An appeals court in January acquitted Amangeldy Batyrbekov, editor of Saryagash Info. In September 2019 Batyrbekov, who published articles critical of the head of a local education department, was sentenced to 27 months in prison for libel and insult.

Arrest and Harassment of Opposition Members

In February, authorities detained several activists to prevent them from taking part in the founding assembly of the Democratic Party of Kazakhstan (DPK). At time of writing, DPK was still unregistered.

Authorities continue to target perceived or actual supporters of the banned Democratic Choice of Kazakhstan (DVK). Police interrogated 52 people suspected of DVK membership in Shymkent in January, and opened a criminal case against 15 people in Almaty in March.

In May the opposition Koshe (Street) Party was banned by court order as “extremist.” Dozens of Street Party activists were prosecuted for participating in unsanctioned peaceful protests.

In response to long-standing International Labour Organization (ILO) criticism of restrictions on trade union organizing and freedom of association, and of the restrictive 2014 Trade Union Law, parliament in April amended the law, removing trade union affiliation and two-step registration requirements. Kazakhstan’s largest independent trade union, the Congress of Free Trade Unions of Kazakhstan, remains unregistered. On March 20, Erlan Baltabay, a trade union leader, was released from prison upon completion of his 21-week sentence for failing to pay a court-ordered fine.

Since 2018, Kazakhstan has repatriated a total of 609 citizens, mostly women and children, from Syria who are Islamic State (ISIS) suspects or relatives. According to media reports, of those repatriated, 31 men and 12 women have been convicted of participating in a terrorist organization.

In January, reporting on her May 2019 visit to Kazakhstan, the United Nations Special Rapporteur for Protecting Human Rights while Countering Terrorism Fionnuala Ní Aoláin noted she was “seriously concerned about the use of the term ‘extremism’ in national law and practice.” She concluded that the broad formulations of “extremism” and “inciting discord” in national law “are used to unduly restrict freedoms of religion, expression, assembly and association.”

An Almaty court in January jailed Zhuldyzbek Taurbekov for seven years on charges of “terrorism propaganda” and “inciting hatred” for discussing Islam on Whatsapp. Kazakhstan’s Supreme Court in January sent for retrial the case against another defendant, Dadash Mazhenov, who was convicted in 2018 on “terrorism propaganda” charges for posting online talks on Islam. Mazhenov alleged he was tortured in a labor camp in 2019.

Violence against Women and Girls

Violence against women and girls persisted as a serious problem. Kazakhstan’s judiciary and legislation do not provide sufficient protection to victims, while police and service providers lack sufficient training to identify, prevent, and adequately respond to domestic violence. Parliament in September passed in its first reading of a draft domestic violence law. The draft does not criminalize domestic violence as a standalone offense, nor include a comprehensive definition of “family members.”

Kazakhstan’s constitution does not prohibit discrimination on the basis of gender identity or sexual orientation, and there is no stand-alone anti-discrimination law. Parliament in June adopted discriminatory amendments to the new health code that regulate aspects of health care for transgender people. The process for changing gender identity in Kazakhstan remains invasive and humiliating.

Feminita’s Supreme Court appeal against the Justice Ministry’s refusal to register their group, which focuses on the rights of lesbian, bisexual, and queer women, was unsuccessful.

Hundreds of thousands of people in Kazakhstan are at risk of poverty due in part to the government’s inadequate measures to counter the Covid-19-related economic downturn. Kazakhstan’s weak social protection system and the limited financial and in-kind relief the government provided to people who had lost jobs during the pandemic were ineffective in preventing poverty and economic hardship. Financial relief was lower than a monthly living wage needed to cover basic expenses. Mothers with multiple children across Kazakhstan continued to intermittently protest calling for increased social and housing benefits.

Progress on inclusive education remained slow. A mandatory medical and educational exam continued as the basis for determining a child’s access to mainstream schools. Many children with disabilities remain isolated in segregated special schools or residential institutions, where they can face violence, neglect, physical restraint, and overmedication. Four children living in a residential institution in eastern Kazakhstan died in May and 16 others were hospitalized with measles and intestinal infections. Kazakhstan has no time-bound plan to close these institutions.

Torture and ill-treatment occur with impunity in Kazakhstan. The Coalition Against Torture, an anti-torture network of nongovernmental organizations and experts, reported they had received 140 complaints of torture between January and June. After an outbreak of ethnic violence on February 7 and 8, which left 10 Dungans and one Kazakh dead, the Dungan community in May issued a public appeal documenting the arbitrary arrests and torture of members of their community by law enforcement. The UN Committee on the Elimination of Racial Discrimination (CERD) issued a communication in August regarding Kazakhstan’s Dungan minority under its early warning and urgent action procedure.

Between March and July, prison officials filed six defamation lawsuits against the Pavlodar-based human rights defender Elena Semenova. The officials alleged her reports of ill-treatment and torture of inmates were false and harmed their reputation. At time of writing, courts in two cases had found her guilty of defamation.

On December 27, 2019, the jailed businessman Iskander Erimbetov, who alleged in 2018 that he had been tortured in custody, was released on humanitarian grounds due to his ill-health. In a tweet, the US State Department welcomed his release and urged the Kazakh government to review other politically motivated cases of imprisonment.

A court in January sentenced ethnic Kazakhs Kaster Musakhanuly and Murager Alimuly to one year in prison for illegal border crossing but did not order their deportation to China. On October 17, Kazakhstan’s migration agency granted them refugee status for one year.

Some measures that authorities implemented in response to the Covid-19 pandemic were arbitrary and disproportionate. Officials in Karaganda bolted shut entryways to entire residential buildings where Covid-19 cases were confirmed. Courts handed up to 15-day jail sentences to at least 1,626 people for violating state-imposed restrictions on movement. Others were criminally charged with spreading false information for criticizing the government’s response to the pandemic. A Shymkent judge sentenced an activist to 35 days administrative arrest for allegedly violating emergency measures after he posted a video of himself passing through a police checkpoint.

The lockdown measures imposed in response to Covid-19 resulted in severe limitations on access to shelters or services for survivors of domestic violence. Authorities did not deem them as “essential services” to ensure they could continue operating during the lockdown.

The education of 4.5 million children was interrupted due to school closures. UN agencies estimate that 300,000 children in Kazakhstan lacked technical facilities to follow remote online learning, and children with disabilities were excluded from full participation.

The United Nations Human Rights Council (UNHRC) in March adopted the outcome of Kazakhstan’s third Universal Periodic Review. In November, member states had called on Kazakhstan to criminalize all forms of violence against women and girls, guarantee freedom of peaceful assembly, ensure inclusive education for all children with disabilities, and amend restrictive laws regulating the right to freedom of expression.

The European Union and Kazakhstan strengthened relations through the entry into force in March of a bilateral Enhanced Partnership and Co-operation Agreement. In September, the EU urged Kazakhstan to ensure that the new peaceful assemblies law is implemented in a rights-respecting way, and welcomed Kazakhstan's progress towards the full abolition of the death penalty.