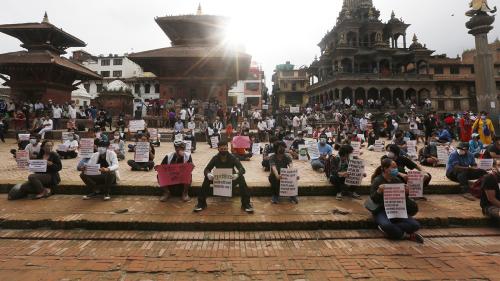 The government of Prime Minister K.P. Oli proposed new laws curtailing free expression, while stalling on promises to implement transitional justice for abuses committed during the civil conflict that ended in 2006.

The government continued to favor impunity for perpetrators—both security forces and members of the ruling Nepal Communist Party—over justice for victims. Authorities also failed to effectively investigate ongoing cases of alleged extrajudicial killings by the security forces and deaths in custody, allegedly as a result of torture. Members of marginalized castes and ethnic communities were at greatest risk of abuse.

Several bills before parliament severely curtail freedom of expression by imposing draconian penalties for broadly defined new offenses regulating media and online speech. Other draft laws give unlimited search and surveillance powers to the intelligence service, and reduce the autonomy of the National Human Rights Commission. A draft citizenship bill retained provisions which limit women’s rights to transmit citizenship to their children or their spouse. However, the draft law did benefit some people currently at risk of statelessness, such as orphans whose parents have not been identified.

Women and girls from the Dalit community were particularly at risk of sexual violence, which is frequently committed with impunity.

Despite a two-thirds’ parliamentary majority, the Oli government made little progress in implementing the federal structure created under the 2015 constitution, including devolving some powers over justice and policing.

On April 27, the Supreme Court rejected a government petition seeking to overturn a landmark 2015 ruling, which required the government to remove amnesty provisions from the 2014 Transitional Justice Act to bring it in line with international human rights law. The government failed to amend the law.

Two transitional justice bodies, the Truth and Reconciliation Commission (TRC) and the Commission of Investigation on Enforced Disappeared Persons (CIEDP), have received over 60,000 complaints but neither completed any cases. The government failed to address concerns that both commissions lacked independence. In January, new commissioners were appointed to both bodies following a process that was rejected by victims’ groups after authorities failed to hold meaningful consultations.

The government also failed to comply with numerous court orders relating to conflict-era police investigations and prosecutions. More than 14 years since the Comprehensive Peace Agreement of November 2006 promised justice to victims, hardly any perpetrator had been held accountable for conflict-era crimes.

Torture became a crime under Nepali law for the first time in 2018, however the practice remains widespread in police custody, and there have been no successful prosecutions. In cases of alleged abuses by police, the police often refused to register a First Information Report (FIR), the document used to initiate a criminal investigation.

The government routinely ignored recommendations by the National Human Rights Commission (NHRC), and in the case of Kumar Paudel, who was killed by the police on June 20, 2019, the Home Ministry asked the NHRC to revise its finding that his death was an extrajudicial killing. In 2019, the government introduced legislation that six United Nations special procedures mandates warned risks “severely undermining the NHRC’s authority, effectiveness and independence.”

On October 15, 2020, the National Human Rights Commission (NHRC) published 20 years of data, naming 286 people, mostly police officials, military personnel, and former Maoist insurgents, as suspects in serious crimes including torture, enforced disappearance, and extrajudicial killings. Investigators concluded the evidence warrants investigations and prosecutions, but in most cases the government had not taken any action at time of writing.

Scores of incidents of caste-based discrimination or violence were recorded, but Dalit activists said the vast majority of cases go unreported, and very few result in official action.

On May 23, the body of a 12-year-old Dalit girl, Angira Pasi, was found hanging from a tree, a day after community leaders in Rupandehi district ordered a 25-year-old man of a different caste who had raped her to marry her. It was one of numerous cases in which Dalit women and girls were allegedly raped and murdered. On the same day, five men were killed in Rukum West district, after a young Dalit man arrived to marry his girlfriend from another caste. Both incidents involved allegations against elected local government representatives.

In July and August, after two men died in separate incidents, independent activists and the NHRC called for investigations into allegations that they died after being abused in the custody of security forces. Both men—Raj Kumar Chepang, 24, who was detained by the army, and Bijay Mahara, 19, who was detained by police— were members of marginalized communities.

Nepal’s 2015 constitution established separate commissions to protect the rights of Dalits, Tharus, Muslims, Madhesis, and indigenous people, and to promote inclusion, but the government left them largely vacant and non-functional.

Numerous pieces of legislation before parliament proposed to severely curtail freedom of expression.

A new Special Service Bill, endorsed by the Upper House in May, provided Nepal’s intelligence agency, the National Investigation Department (NID), with sweeping new powers to intercept communications and search properties without judicial oversight. Other bills currently before parliament, including the Media Council Bill, the Information Technology Bill, and the Mass Communications Bill, contain numerous draconian measures seeking to control the media and limiting freedom of expression for journalists and social media users, threatening custodial sentences for those who violate broad and vague prohibitions especially for online speech.

In 2020, the Nepal government repeatedly imposed national and local lockdown measures in an attempt to control the Covid-19 pandemic. The government has a duty to protect public health, but poor design and implementation of policies led to disproportionate impacts, especially on the most marginalized.

After decades of progress on maternal and infant health, research found that the number of births in health facilities fell by more than half during a four-month national lockdown which began in March. The rate of neo-natal deaths increased. Marginalized ethnic groups, such as Madhesis, suffered greater declines in access to clinical services. The government has an international legal obligation to ensure access to healthcare during lockdowns.

Daily wage laborers and farmers suffered disproportionate harm to their livelihoods and economic rights. Thousands of internal migrants were forced to walk hundreds of kilometers home after losing their jobs, while workers who had traveled abroad were stranded at the borders after entry points were closed. School closures disrupted the education of more than 8 million children, who remained out of school at time of writing.

Nepal’s 2006 Citizenship Act, as well as the 2015 constitution, contain provisions that discriminate against women. A draft citizenship bill, which passed the parliamentary committee stage in June, retained several discriminatory provisions. In September, three UN human rights experts wrote to the government raising concerns that “the bill would continue to discriminate systematically against women, regarding their ability to transmit citizenship through marriage and to their children.”

Legal gaps and lack of political will continued to mar accountability for sexual violence, especially for victims from minority communities. A statute of limitations of one year on rape and sexual violence allegations prevents many cases from being brought to justice.

The law was strengthened to increase penalties for perpetrators of acid attacks and to regulate the sale of acid.

The 2015 constitution recognizes a third gender and protects “gender and sexual minorities” in clauses related to equality before the law and social justice. The Supreme Court legally recognized a third gender category based solely on self-identification, but under the draft citizenship law, selection of the “other” gender category would require the presentation of a medical certificate. In 2007, the Supreme Court mandated a study on equal marriage rights for same-sex couples, but the 2018 criminal code only recognizes marriages between men and women.

Nepal turned to China as a partner of increasing importance, strengthening investment and trading ties, including participation in China’s “Belt and Road” Initiative. As a result, restrictions on free assembly and expression rights of the Tibetan community continued, under political pressure from China. Following a visit to Kathmandu by President Xi in October 2019, the two countries negotiated a series of new agreements, including an extradition treaty, which would place activists or Tibetan refugees at risk.

The Nepal government remains dependant for much of its expenditure on international development aid. Several of Nepal’s donors have funded programs for many years intended to support respect for human rights, police reform, access to justice, and respect for the rule of law, but have not pressed the government to end the impunity of the security forces.

In its successful bid to be elected to the UN Human Rights Council in 2018, Nepal claimed, in 2017, to respect the authority and independence of the NHRC and the judiciary, and said it would pursue a credible transitional justice process. Despite failing to live up to these commitments, Nepal was re-elected for a second term from 2021-23.