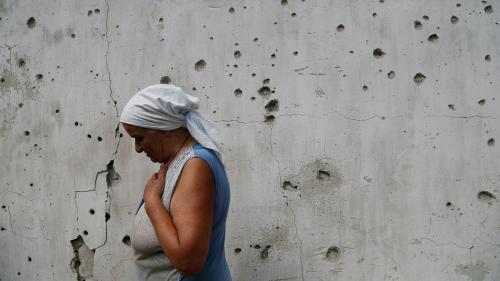 The armed conflict in eastern Ukraine continued to take a high toll on civilians during 2020, from threatening their physical safety to limiting access to food, medicines, adequate housing, and schools.

The Covid-19 pandemic worsened these trends. Travel restrictions imposed by Russia-backed armed groups in parts of eastern Ukraine and by Ukrainian authorities in response to the pandemic had a devastating impact on economic and social rights, exacerbating hardship for civilians and driving them deeper into poverty. Older people, women, children, and people with disabilities were hit the hardest.

Armed groups controlling parts of Donetska and Luhanska regions continued to carry out arbitrary and incommunicado detentions and use ill-treatment and torture in conflict-related cases, including to extract confessions. Justice for conflict-related abuses by government forces, including arbitrary detentions, torture or ill-treatment remained elusive.

The government proposed legislative amendments that threaten freedom of expression and media. Journalists and media workers faced harassment and threats connected to their reporting.

Flare-ups in hostilities, notably in March and May, led to civilian casualties. According to data by the United Nations human rights monitoring mission, in the first seven months of 2020, 18 civilians were killed and 89 injured by shelling, small arms weapons fire, mine-related incidents and unmanned aerial vehicles (UAV) strikes. Schools and educational facilities continued to be damaged by shelling, small arms and light weapons fire.  Most of incidents occurred in the nongovernment-controlled areas.

Draft legislation is pending in parliament that would provide reparations to civilians for loss of life, health, and property during the conflict.

In the first half of 2020, government policies linking pension eligibility with displaced persons’ status continued to discriminate against and create hardship for older people living in nongovernment-controlled areas by forcing them to regularly travel across the line of contact to access their pensions. In February, parliament failed to pass legislation that would have addressed this linkage on the premise that the state budget could not cover the cost of arrears owed to these pensioners.

As a result of harsh Covid-19 restrictions imposed by armed groups in parts of Donetska and Luhanska regions and by Ukrainian authorities at least 1.2 million people living in conflict-affected areas have been unable to get their pensions or re-unite with family since March.

Ukraine authorities required people entering from nongovernment-controlled areas to install a smartphone app to monitor compliance with restrictions, even though many people do not own a smartphone. They also require people to self-isolate for 14 days, which is prohibitively expensive for older people living in these areas. In a welcome move, authorities temporarily lifted the requirement for internally displaced pensioners to undergo regular identification checks for the duration of the quarantine. Restricted access to pensions pushed older people deeper into poverty, forcing them to cut back on food, hygiene products, and vital medications.

Armed groups in Donetska region introduced severe travel restrictions in response to Covid-19, effectively prohibiting residents with local residence permits from leaving during the pandemic. Those with residency permits in government-controlled areas who wanted to leave Donetsk were required to sign a document undertaking not return until the end of the pandemic. When one of the four entry-exit checkpoints in Donetsk region reopened, armed groups only admitted people based on pre-approved lists, and required a 14-day quarantine in medical facilities for those entering the area under their control. Armed groups in Luhanska region only admitted people who have local residence registration but imposed no restrictions on leaving.

Rule of Law, Administration of Justice

The trial of four defendants over the 2014 downing of Malaysia Airlines flight MH17, which began in the Netherlands in March, continued, with interruptions due to coronavirus restrictions. All four suspects were being tried in absentia.

No progress was made in the investigation and trials in cases related to 2014 clashes in Odesa, which claimed the lives of 48 people.

In December 2019, an appeals court released five former officers of the Berkut riot police, under investigation in the case of the killing of 48 protesters and attempted killing of 80 during the Maidan protests in Kyiv in February 2014. They were subsequently transferred to Donetsk and Luhansk as part of a prisoner exchange.

In February, authorities placed a law enforcement official under house arrest on charges of killing a Maidan protester in February 2014. Two months later, he was released on bail. In March, investigators detained two men for the abduction and torture of two Maidan protesters in January 2014, one of whom died as a result. At least two other investigations continued into the killings of protesters. One of these was against former president Viktor Yanukovich.

In April, authorities placed a Maidan activist under house arrest in connection with the February 2014 arson of the Party of Regions office, which led to the death of one man.

In August, Ukrainian groups expressed concerns about a smear campaign against the deputy prosecutor general, tasked with overseeing the work of the department for investigations of crimes committed during the armed conflict.

In September, parliament passed in first reading a draft law that would incorporate into domestic legislation provisions concerning the investigation and prosecution of genocide, crimes against humanity and war crimes.

The Covid-19 pandemic disproportionately affected women, who account for over 80 percent of Ukraine’s healthcare and social workers. The pandemic-related restrictions led to a surge in domestic violence, with reported cases increasing by 30 percent. According to service providers, victims were often unable to escape abuse during the pandemic due to lack of shelter space and inadequate police response.

In February, President Volodymyr Zelensky pledged to submit the Council of Europe (CoE) Convention on the Prevention of Violence against Women and Domestic Violence (Istanbul Convention) to parliament for ratification, pending additional instructions by relevant ministries. The government signed the convention in 2011.

In December 2019, police apprehended three suspects in the ongoing investigation into the 2016 killing of journalist Pavel Sheremet.

In the same month, journalists Stanislav Aseyev and Oleh Halaziuk were released as part of a prisoner exchange, after having been captured and held by Russia-backed militants since 2017.

In January, the government introduced a legislative proposal against dissemination of “disinformation” that would have jeopardized freedom of expression and media independence. The proposal did not advance in parliament.

In June, a court in Kherson arrested a high-level municipal official for ordering the acid attack on the anti-corruption activist Katerina Handziuk in 2018, which resulted in her death.

In July, a journalist’s private information was hacked and published online after a media outlet she co-founded published investigative reports alleging ties between far-right groups and Ukraine’s media outlets. She fled Ukraine after receiving threats of death and other violence. In September, authorities opened a criminal case, but qualified the incident as “invasion of privacy” rather than “interference in journalistic activities.”

In June, a parliamentary committee declined to advance for further consideration draft legislation increasing accountability for hate crimes, including those based on gender identity and sexual orientation.

In August, a group of local residents attacked the home of a Roma family in Kharkiv region, following calls for anti-Roma violence in social media.

Also in August, a group of counter-protesters advocating “traditional values” attacked participants celebrating LGBT rights in Odesa Pride, threw objects at them, sprayed teargas and injured two policemen. The police arrested 16 people on hooliganism charges, but did not charge them with hate crimes.

In April, a group of men robbed, severely beat, and sexually assaulted a 19-year-old transgender person in Zhytomyr. The police initially registered the incident as a robbery, but in July, under pressure from human rights defenders, opened additional investigations into rape and a hate-motivated crime.

In September, a Russian military court sentenced seven activists with Crimean Solidarity, a group that provides financial and legal assistance to Crimean Tatar families, to prison terms ranging from 13 to 19 years for alleged association with Hizb-ut Tahrir, banned in Russia as a “terrorist” organization but legal in Ukraine. One man was acquitted.

Russian authorities continued to conscript males in occupied Crimea to serve in Russia’s armed forces, in violation of international humanitarian law. The authorities imposed criminal penalties against those who refused to comply with the draft. Russian authorities also conduct enlistment advertising campaigns in Crimea and provide military propaganda for schoolchildren there.

In January, Russian authorities denied entry to Crimea to Taras Ibragimov, a Ukrainian journalist, and banned him from entering Russia until 2054. Authorities did not provide a meaningful explanation, instead citing general concerns for national security and public order.

In April, the United Nations Committee on Economic, Social and Cultural Rights expressed concern in its concluding observations about human rights implications of the draft amendments to Ukraine’s trade union laws. It encouraged Ukraine to review the draft law, with a view to ensuring the effectiveness of collective bargaining and of the right to union representation.

In June, during their annual human rights dialogue, the European Union and Ukraine agreed on the need to facilitate the payment of pensions to residents of non-government controlled areas, to de-link pension payments from IDP status, and to demonstrate progress in the investigations into crimes committed in 2014 and into the killings of Kateryna Handziuk and Pavlo Sheremet.

In July, the UN High Commissioner for Human Rights noted at the UN Human Rights Council that “human rights violations involving torture and other ill-treatment perpetrated by law enforcement agencies continued in Crimea.” The High Commissioner reminded Ukraine of its obligation “to use all available means to ensure respect for the enjoyment of human rights in Crimea as well as of Crimean residents” outside of the area.

In September, the UN Children’s Fund (UNICEF) called for Ukraine to “strengthen protection of schools” in the east, by accelerating the implementation of the Safe School Declaration. It stated that children and teachers in 3,500 educational facilities are “currently affected by the ongoing violence [in eastern Ukraine] and remain at risk.”

In December, the Office of the Prosecutor of the International Criminal Court (ICC) announced that the criteria have been met to open an investigation into war crimes and crimes against humanity by parties during the armed conflict in Ukraine. While Ukraine is not a member of the ICC, it accepted the court’s jurisdiction over alleged crimes committed on its territory since November 2013.