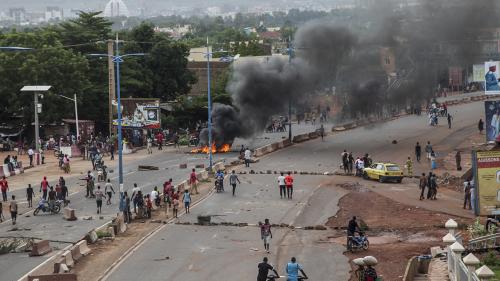 Mali’s human rights situation deteriorated in 2020 amid ongoing abuses by armed Islamist groups, ethnic militias, and government security forces.  A political crisis resulted in the August toppling of the government in a military coup.

Armed Islamist groups attacks on civilians, as well as soldiers and international forces, continued in northern Mali, intensified in the center, and spread into southern parts of the country. Ethnic self-defense groups, formed to protect villages from attacks, killed hundreds, leading to widespread displacement and hunger. The Malian security forces summarily executed scores of suspects for their perceived support of armed Islamist groups, and used excessive force when responding to political protests, resulting in at least 14 deaths.

The worsening security situation, perceived government corruption, and controversial parliamentary elections that were marred by violence and irregularities, provoked massive demonstrations in the capital, Bamako, and elsewhere.

The peace process envisioned to end the 2012-2013 crisis in the north made minimal progress, including on disarmament and the restoration of state authority. Over 40,000 civilians fled their homes as a result of violence in 2020. Attacks by armed groups on humanitarian agencies undermined their ability to deliver aid. Rampant banditry continued to undermine livelihoods. Attacks on children also continued. The United Nations reported that at least 185 children were killed due to communal violence, crossfire, or improvised explosive devices (IEDs). Armed groups and forces continued to recruit children as soldiers, and armed groups were responsible for at least 55 attacks on schools in 2019.

Little progress was made toward providing justice for victims of abuses, including several large-scale atrocities, and rule-of-law institutions remained weak.

Mali’s international partners, notably the UN, France, Germany, Canada, the European Union, the African Union (AU), the Economic Community of West African States (ECOWAS), and the United States were more willing to denounce atrocities by the army than in past years but were inconsistent in their calls for accountability.

The March 29 and April 19 parliamentary elections were marred by violence and irregularities. Controversial constitutional court rulings on 30 contested seats gave the ruling party a parliamentary majority and sparked massive protests during June and July. The protests, underscored by frustrations over government corruption and slow progress on addressing the security crisis, were led by a coalition of opposition political parties, religious leaders, and civil society organizations under the umbrella of The June 5 - Rally of Patriotic Forces Movement (Mouvement du 5 juin Rassemblement des Forces Patriotiques or M5-RFP).

In May, three opposition leaders including Clement Dembele, also an anti-corruption campaigner, were arrested for disrupting public order. Two of them were released within days, but Dembele was held for two weeks without due process. Charges against him were later dropped.

During demonstrations on July 10-12, protesters erected barricades; threw stones and used slingshots; occupied, burned, and looted parts of government buildings; and threatened a judge’s home. Security forces arrested, but released on July 13 at least five opposition leaders, ransacked the M5-RFP headquarters, and used teargas and live rounds to disperse protesters. Authorities blocked social media and messaging services in the country for several days during the unrest.

On August 18, military officers overthrew the government in a coup, and detained the president, prime minister, several cabinet members, and generals. The coup leaders, called the National Committee for the Salvation of the People and led by Col. Assimi Goïta, appointed Bah Ndaw, a former colonel and defense minister, as interim president on September 21. Ndaw promised a civilian government would be elected within 18 months.

During 2020, at least 400 villagers were killed in numerous incidents of communal violence, mostly in the Mopti region. The violence pitted ethnic Dogon self-defense groups against those of Peuhl, or Fulani, who sometimes had the support of armed Islamist groups. Most of those killed in 2020 were ethnic Dogon. The attacks targeted people in their villages, farms, or markets, and provoked widespread displacement and a hunger crisis.

During attacks in March, Peuhl militiamen were implicated in the killing of 48 Dogon civilians in several villages in the Bankass administrative area, and at least 27 others on May 26 and 27, near Tillé village. In August, at least six Dogon were killed in Timiniri Administrative area near Bandiagara.

Dogon militiamen were implicated in several attacks: in January on Siba village, killing 14; the March 14 massacre of 35 Peuhl villagers in Ogossagou village, site of the 2019 massacre of 150 civilians; the March 22 killing of at least 20 Peuhl in Baye commune, and the May 5 killing of 18 near Djenne.

Armed Islamist groups allied to Al-Qaeda and the Islamic State in the Greater Sahara killed scores of mostly-Dogon civilians, as well as at least 5 peacekeepers and several hundred government security force members. In July, 32 Dogon were killed in attacks on Djimindo, Gouari and Fangadougou villages in Mopti region.

Armed Islamists continued to threaten, and sometimes kill local leaders deemed government collaborators and beat those engaged in cultural practices they had forbidden. They also imposed their version of Sharia (Islamic law) via courts that did not adhere to fair trial standards.

Malian security forces were implicated in over 250 unlawful killings of suspects and civilians, and several enforced disappearances from December 2019 through August 2020. Most killings took place during counterterrorism operations in Mopti and Segou regions and targeted ethnic Peuhl. The UN also reported that soldiers from Burkina Faso were implicated in some 50 extrajudicial killings perpetrated during cross-border operations from May 26 to 28.

On December 19, 2019, Malian soldiers allegedly detained and executed at least 26 traders and then threw their bodies into a well in Ndoukala, Segou region. In June, soldiers were implicated in the killing of 14 people in Niangassadou village and 29 civilians in Binidama.  In February, they allegedly executed 19 people in Ouro-Diam village.

Malian security forces also used lethal force in responding to protests in Bamako in July, resulting in at least 14 deaths. Over 300 people, including demonstrators, bystanders, and security force members were wounded.

On October 22, Malian forces were accused of killing two dozen Peuhl villagers in Libé, in the Bankass administrative area.

Numerous men accused of terrorism-related offenses were detained by the national intelligence agency in unauthorized detention facilities and without respect for due process.

There was little progress on delivering justice for war crimes and other atrocities committed since 2012. The government appeared to favor short-term reconciliation efforts envisioned to mitigate communal tension.

The judiciary remained plagued by neglect and mismanagement, with many abandoned posts in northern and central Mali due to insecurity. Hundreds of detainees were held in extended detention awaiting court trials. Over 1,600 prisoners were either pardoned or released to reduce the risk of the spread of Covid-19 in overcrowded prisons.

The Specialized Judicial Unit against Terrorism and Transnational Organized Crime (SJU), the investigations mandate of which was expanded in 2019 to include international human rights crimes, made progress on terrorism cases, and some progress on two 2019 atrocity investigations.

In late 2019, a court in the Mopti region tried and convicted some 45 people for several smaller incidents of communal violence, although magistrates had yet to question powerful militia leaders implicated in the worst atrocities. Security force members failed to respond to judicial summonses or help gendarmes arrest high-level suspects, hindering progress on these cases.

The International Commission of Inquiry, established under the 2015 peace accord to investigate serious violations between 2012 and January 2018, submitted its report to the UN secretary-general on June 16. At time of writing the report remained confidential.

Public hearings scheduled for 2020 by the Truth, Justice and Reconciliation Commission, established in 2014 to investigate crimes and root causes of violence since 1960, were delayed because of the Covid-19 pandemic.

The National Commission for Human Rights investigated some abuses and issued numerous communiques but appeared reluctant to investigate abuses by the security forces.

France and the United States led on military matters, the European Union on training and security sector reform, and the United Nations on rule of law and political stability. In the wake of the August coup, ECOWAS and the AU suspended Mali from their decision-making bodies; the US suspended military aid; and the EU suspended its military and police training programs.

In June, France launched the International Coalition for the Sahel, to coordinate between the G5 Sahel countries (Mali, Mauritania, Burkina Faso, Niger, and Chad) and their international partners.

In June, the EU’s high representative expressed outrage at the killing of over 40 civilians with the likely involvement of Mali’s armed forces. He urged accountability for the crimes committed and stressed that the EU’s engagement is conditional to the respect of international human rights and humanitarian law. In September, the European Parliament echoed those concerns, urged the EU to support Mali’s democratic transition, and called for a comprehensive reform of the EUTM in order to ensure better selection, training and scrutiny of the armed forces and of their operations.

The UN Security Council renewed for one year the mandates of the UN Multidimensional Integrated Stabilization Mission in Mali, MINUSMA, and the Mali Sanctions Committee Panel of Experts which, in August issued a report implicating high-level Malian officials in obstructing the 2015 peace process and failing to prevent the 2020 Ogossagou massacre. In June, the UN Human Rights Council renewed the mandate of the UN independent expert on Mali for another year.

MINUSMA supported government atrocity investigations, justice sector reform, and increased patrols in areas vulnerable to attack. However, its ability to fulfill its civilian protection mandate was challenged due to lack of equipment, notably air assets. The human rights section significantly increased public reporting on abuses by all sides.

In July, the International Criminal Court (ICC) opened a trial against Al Hassan Ag Abdoul Aziz Ag Mohamed Ag Mahmoud, a former leader of the Islamist armed group Ansar Dine, on charges of war crimes and crimes against humanity, including rape and sexual slavery committed in 2012-2013. It is the ICC’s second trial in the Mali situation, and the court’s first trial of gender-based persecution.