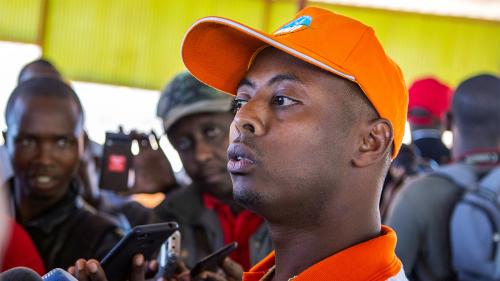 The ruling Rwandan Patriotic Front (RPF) continued to target those perceived as a threat to the government during 2020. Several high-profile government critics were arrested or threatened. Authorities failed to conduct credible investigations into the suspicious death in police custody of well-known singer and activist, Kizito Mihigo, in February.

Rwanda continued to host tens of thousands of refugees, mainly from neighboring countries, as well as several hundred asylum seekers transferred from Libya. In August, the government began implementing, with the United Nations refugee agency, the first organized voluntary repatriation of refugees from Rwanda to Burundi.

Political Space and Freedom of Expression

The arrest and detention of Paul Rusesabagina, a prominent critic of the RPF, which started as an enforced disappearance, raised grave concerns over his ability to receive a fair trial in Rwanda. Rusesabagina, who fled to Belgium in 1996 and is now a Belgian citizen, was living in the United States when he traveled from the US to Dubai, United Arab Emirates, on August 27. He was forcibly disappeared on or about the evening of August 27 until the Rwanda Investigation Bureau (RIB) announced it had Rusesabagina in custody in Kigali, Rwanda, on August 31. Rusesabagina’s family members were not able to speak with him until September 8, and it is disputed whether he was able to hire lawyers of his choosing. His trial was ongoing at time of writing.

On February 17, police announced that Kizito Mihigo had been found dead in his cell at the Remera Police Station in Kigali in an alleged suicide, four days after his arrest near the border with Burundi. Shortly before his death, he told Human Rights Watch that he was being threatened and told to provide false testimony against political opponents, and that he wanted to flee the country because he feared for his safety. Rwandan authorities issued a statement on February 26 concluding that Mihigo died by strangulation in a probable suicide, but failed to make details of the investigation public or meet standards expected for an investigation into a death in custody. In 2015, Mihigo had been sentenced to 10 years in prison on allegations including the formation of a criminal gang, conspiracy to murder, and conspiracy against the established government or the president, but was released in September 2018 after a presidential pardon.

On December 27, 2019, the Rwandan Court of Appeal upheld the conviction of two former military officials, although the court reduced their sentences to 15 years each. Col. Tom Byabagamba and retired Brig. Gen. Frank Rusagara were sentenced to 21 and 20 years in prison respectively by the Military High Court of Kanombe in 2016, on charges including inciting insurrection and tarnishing the government’s image.

Prosecutors accused them of criticizing the government. The Court of Appeal failed to investigate allegations of torture and witness tampering made during the trial. After Byabagamba and Rusagara’s lawyers filed an application with the East African Court of Justice in February, new charges were brought against Byabagamba, who was then accused of attempting to bribe his way out of prison. Between April 15 and 17, 2020, three people connected to Byabagamba were arrested and accused of helping him escape. Two were released in April, and the third was released in July.

Throughout the year, the RIB carried out house searches, seized property, including electronic equipment, and repeatedly called in for questioning Victoire Ingabire, the former president of the FDU-Inkingi opposition party who formed a new party, the Dalfa-Umurinzi, in November 2019. In a trial concluded on January 23, 2020, seven members of Ingabire’s party were convicted of charges including complicity in forming or joining an irregular armed force, and handed sentences ranging from seven to ten years’ imprisonment.

Three others—Théophile Ntirutwa, Venant Abayisenga, and Léonille Gasengayire—were acquitted of all charges and released. After their release, they gave video interviews to local YouTube channels detailing their pretrial detention and alleging ill-treatment and torture, including in Kwa Gacinya, an unofficial detention facility in the Gikondo neighborhood of Kigali, and in Mageragere and Nyanza prisons.

Abayisenga was reported missing in June, and is feared forcibly disappeared, after going out to buy phone credit. Ntirutwa was rearrested following an attack at his shop in Rwamagana District on May 11. On May 18, Ntirutwa and three others at his shop at the time of the attack were charged with offenses including murder, theft, and “spreading false information with intent to create a hostile international opinion against the Rwandan State.” At time of writing, they were awaiting trial.

State interference and intimidation have forced many civil society actors and journalists to stop working on sensitive political or human rights issues. Most print and broadcast media continued to be heavily dominated by pro-government views. Independent civil society organizations are very weak, and few document and expose human rights violations by state agents.

In March, four bloggers who reported on alleged rapes by security forces and negative impacts of government directives to counter the spread of Covid-19 on vulnerable populations were arrested in circumstances that appeared retaliatory. In the months prior to their arrest, they also shared testimonies about a long-standing dispute with authorities over land evictions in Bannyahe, a poor neighborhood of Kigali.

On April 8, RIB and police agents arrested Valentin Muhirwa and David Byiringiro, two bloggers with Afrimax TV, in Kangondo II, a neighborhood of Kigali. Two residents said the bloggers had requested permission from the local leader to distribute food and goods after hearing about the population’s struggles, but RIB and police agents arrested the men, accusing them of violating government directives and organizing an unauthorized distribution.

On April 12, RIB tweeted confirmation of the arrest of Théoneste Nsengimana, the owner of Umubavu TV, for alleged fraud. RIB accused him of promising 20,000 Rwandan Francs (US$21) to people to say they were receiving assistance from abroad.

The Rwanda Media Commission said in a statement on April 13 that none of the detained bloggers were arrested in retaliation for their work and that online bloggers, such as those using YouTube, are not journalists and are “not authorized to interview the population.” Muhirwa and Byiringiro were released in April. Nsengimana, released in May, was awaiting trial at time of writing.

On April 15, Dieudonné Niyonsenga, also known as Cyuma Hassan, the owner of Ishema TV, was arrested with his driver, Fidèle Komezusenge. RIB accused Niyonsenga of violating the lockdown measures and giving Komezusenge an unauthorized press pass. According to the Committee to Protect Journalists, they were charged with forgery and claiming to be journalists. Their trial was ongoing at time of writing.

Transit centers in Rwanda are governed by a 2017 law establishing the National Rehabilitation Service, which states that anyone exhibiting “deviant behaviors” can be held for up to two months, without any other further legal justification or oversight. In January 2020, Human Rights Watch found that the new legislation provides cover for the police to continue to round up and arbitrarily detain children in deplorable and degrading conditions at Gikondo Transit Center. In February, the UN Committee on the Rights of the Child called for a halt to arbitrary detention of children in transit centers in Rwanda, for investigations into allegations of ill-treatment—including beatings—and for amendments to the legal framework that regularizes this abuse.

Rwandan authorities reacted swiftly and aggressively to the threat of the global Covid-19 pandemic. Police arrested over 70,000 people for infractions related to the measures introduced in March to prevent the spread of Covid-19, including a curfew, the closure of bars of restaurants, and restrictions on movement. Authorities accused people of violating the measures and detained people in stadiums without due process or legal authority. Schools were closed for at least six months, starting in March, due to the pandemic, affecting about 3.4 million children.

The arrest of Félicien Kabuga, one of the alleged masterminds of the Rwandan genocide, in France in May marked a major step toward justice for genocide victims and survivors. Kabuga is charged by an international war crimes court with genocide and related crimes during the 1994 genocide, and was living in France under a false identity at the time of his arrest.

In May, the IRMCT announced that the remains of another high profile genocide suspect— Augustin Bizimana, the minister of defense at the time of the killings—were identified in a grave in Pointe-Noire, Republic of Congo. He is thought to have died around August 2000. In 1998, the ICTR indicted Bizimana on 13 counts of genocide and other related crimes.

In August 2020, Rwandan judicial authorities issued an international arrest warrant against Aloys Ntiwiragabo, the former head of military intelligence during the genocide, after media revealed in July that he was hiding in France. France opened a probe into alleged crimes against humanity by Ntiwiragabo after his whereabouts were revealed. Ntiwiragabo had previously been the subject of arrest warrants, including by the ICTR.